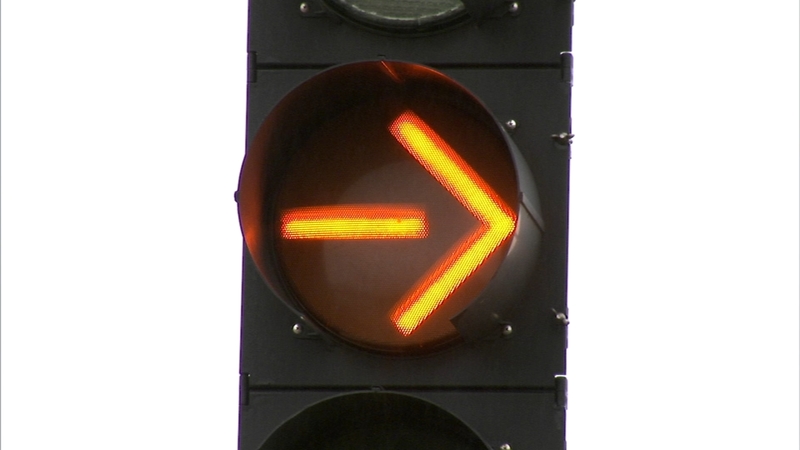 LYNWOOD, Ill. (WLS) -- Is three seconds long enough for a yellow traffic light? It's the bare minimum for a yellow light in Illinois, and paired with a red light camera, it can be expensive.

One red light camera in south suburban Lynwood made $380,000 in revenue last year.

"I didn't even see the light turn red at all as I made my turn," ticketed driver Louis Oseguera told Investigative Reporter Jason Knowles.

That camera caught Oseguera at a "no turn on red" at U.S. Route 30 and Illinois Route 83. There is a green right turn arrow.

"I'm just getting ready to make the turn and the light turned yellow," Oseguera explained.

That yellow arrow times a little over three seconds, just above the three second state minimum. All of the other yellow lights at the same intersection are about four seconds, according to police.

"The yellow light the duration is controlled by IDOT. We have not requested or had that duration changed since the intersection has had a traffic light even prior to the red light camera being installed and it hasn't been changed since then," explained Terrence Shubert, Deputy Chief of Lynwood police.

Oseguera's wife Sandy contested the $100 ticket, saying the yellow arrow is too short.

She lost her case and paid up.

"I really think it is a way of catching a lot of people and making some money for the city," Sandy Oseguera said.

Louis Oseguera said that ss you are approaching the white intersection line, and the light is turning yellow to red, you can't see the traffic light because you pass it when you get to the right lane.

Knowles asked Deputy Chief Shubert about this and he said that even if Oseguera didn't see what police call the "courtesy" traffic light to the right, that there is another set of traffic lights across the intersection. But the Oseguera's aren't the only drivers complaining.

"Well it says to me that Lynwood is a rip off. And -t's set-up like that," said ticketed driver Charlese Smith. "The system is designed for you to fail. I told the judge that I believe that you're going too fast to actually stop, when you have a three second yellow light. And you're going 45 miles per hour, your first instinct is to keep going. By the time I went across, the light snapped. And I was found liable."

"You get to it, going about 40 to 45 miles an hour and you've got about three seconds to make a decision, and once the decisions made a picture's been snapped and you've either gone through it or you stop and you're running the risk of someone rear-ending you," said driver Don Hiemstra.

But Lynwood Police said according to IDOT crash data and a study by the private camera company, since the camera was installed, there's been a 54% decrease in rear-end collisions where the camera faces and a 37% reduction in total crashes at the intersection.

"When the decision was being made to install the red light camera, there were traffic studies being done that incorporated both the traffic crashes, the severity of them, the number of them and traffic location," Deputy Chief Shubert said.

Lynwood said it's a coincidence that the corner with the camera has the shorter yellow turn light.

When asked if it's fair to pair that camera with a shorter yellow, Deputy Chief Shubert replied, "Whether or not it's fair is something a traffic feasibility study would determine completed by IDOT, because they control the duration of the traffic lights and the yellow light. We have not made any requests for that to be changed."