WLS
By Alan Krashesky
VATICAN CITY (WLS) -- Blase Cupich has been elevated to cardinal by Pope Francis at a ceremony in the Vatican Saturday morning.

Cupich's elevation comes two years after he became Chicago's archbishop. He is the seventh cardinal in Chicago's history.

In the grandeur of St. Peter's Basilica, Archbishop Cupich approached the seated Pope Francis and kneeling down received the red skullcap, or zucchetto, and later the hat, known as a biretta. In that moment, he became a cardinal, a prince of the Roman Catholic Church.

Blase Cupich is now a member of the College of Cardinals, one of the most exclusive groups on the planet and 120 of them are responsible for the role of choosing the next pope - when that time comes.

Cupich was chosen for Chicago by Pope Francis, so this is a way of Pope Francis assuring that what he started, continues.

The new Cardinal Cupich was recalling the people of his ministry and hearing Pope Francis give him some marching orders.

Chicago Archbishop Blase Cupich was elevated to cardinal in a ceremony Saturday at the Vatican.

"He feels as though there's a tendency for all of us to kind of get into ideologies to the point where we overthink things and we really are not dealing with the real lives of people. There's no such thing in humanity, there shouldn't be, of enemies because we're all sons and daughters of God. He said this in his apostolic letter, he said realities are greater than ideas. That's a powerful statement," Cupich said.

The new cardinal now wears a new ring on his hand, given to all the newly elevated cardinals by the pope. It bears the images of Saint Peter and Saint Paul and there's also a star on the motif. The star symbolizes the Virgin Mary, the mother of Jesus.
And his new red hat will become a familiar sight.

The cardinal unveiled his new Twitter handle shortly after his elevation, tweeting, "I am humbled and encouraged by this honor and responsibility bestowed by @Pontifex. Keep those prayers coming!"

I am humbled and encouraged by this honor and responsibility bestowed by @Pontifex. Keep those prayers coming!

"Chicago is a very Catholic town but I think because the best parts of Catholicism, that it's a humane town, it cares about civic virtue, and it cares about all Chicagoans, so the elevation of Cardinal Cupich is a recognition of how important those virtues are to Chicago," Dr. Murphy said.

Dr. Michael Murphy, the director of Catholic studies at Loyola University, talks about the impact of Cardinal Cupich?s elevation.

Rauner said Pope Francis' decision to elevate Archbishop Cupich to the College of Cardinals reflects his desire to be "part of the real world" and deal with "real current problems" facing the world today with humility.

"Cardinal Cupich is a man of that philosophy and he'll be working with us, solving problems every day in Chicago and around Illinois," said Rauner.

"We should all recognize that when the Pope was given a choice, he picked Chicago," said Mayor Emanuel. He said Cardinal Cupich's selection highlights "the role of Chicago in the church" and that the new Cardinal and his voice of "inclusion and unity" is "a very good partner to have for the city."

"I think it enhances his voice in the community of faith, said Senator Dick Durbin. "He has been outspoken in so many positive ways in the time that he served as archbishop so now this so called elevation, promotion is going to give him even more credence."

Instead of a party celebrating his elevation Saturday evening, Cardinal Blase Cupich chose to host a reception to raise money for Catholic Extension, a group based in Chicago that raises money for poor mission dioceses across the United States.

Catholic Extension organized the Chicago pilgrimage to Italy and Fr. Wall said Cardinal Cupich is using his elevation night influence to "help some of the poorest places along the Texas-Mexico border."

"Pope Francis came to the border right there on the Mexican side to really raise awareness in our world of these migrant communities fleeing poverty and violence in all its forms and saying we've got to come up with solutions," Fr. Wall said.

Cardinal Cupich even gave a hometown shoutout at the informal meet-and-greet with the other new cardinals Saturday afternoon with this Cubs W flag, honoring the World Series Champions halfway around the world. 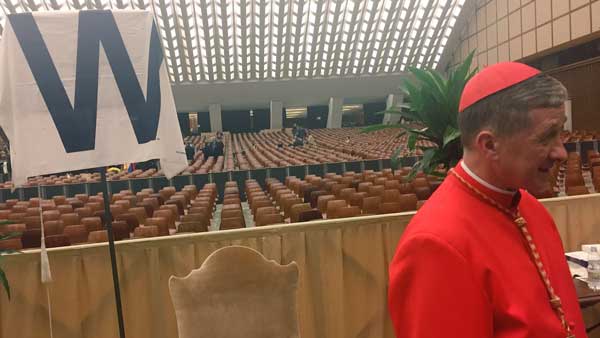