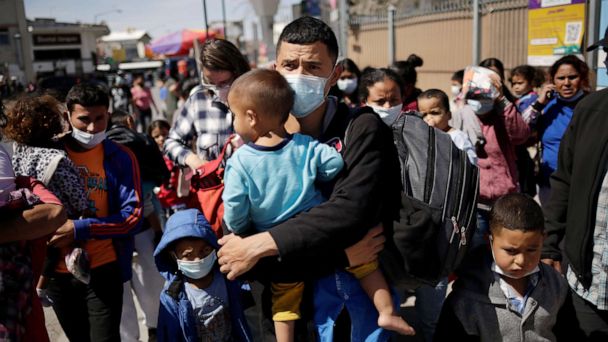 Republicans on Capitol Hill are seizing on the record surge in migrants at the southern border to bring increased scrutiny to President Joe Biden's immigration policies and the administration's recent easing of some restrictions.

"If you look at where we are right now, you have thousands of people crossing illegally into the United States every single day. Those border states are getting overrun, it's a drain on their resources, there are super spreader caravans coming across," Rep. Steve Scalise, the House majority whip, said in a statement.

House Minority Leader Kevin McCarthy is leading a delegation of a dozen Republican members to the border on Monday to assess the crisis at the border, his office said.

And Senate Republicans are in the early stages of organizing a trip of their own, but the dates have yet to be determined, sources familiar with the planning told ABC News.

Sen. Tom Cotton, R-Ark., reportedly met last week with other conservative Republicans to tout what they see as a potent line of attack heading into the crucial midterm elections, which could determine the balance of power in the Senate.

"What we are witnessing of course is Biden's border crisis," Rep. John Katko, N.Y., the top Republican on the House Homeland Security Committee, told reporters at a news conference on Thursday. "If you want to think of it another way, it's a disorder at the border, by executive order."

In a news conference earlier this week, the White House coordinator for the southern border, Amb. Roberta Jacobsen, admitted what she described as the current struggle in conveying the right public messaging on the issue.


"I think when you look at the issue of mixed messages, it is difficult at times to convey both hope in the future and the danger that is now. And that is what we're trying to do," Jacobsen said during Wednesday's White House press briefing. "And I -- I will certainly agree that we are trying to walk and chew gum at the same time."

John Sandweg, a former general counsel for the Department of Homeland Security, told ABC News immigration is a no-win issue.

"You can't win politically on immigration, for whatever reason it's a supercharged issue in this country, and you really just have to focus on what's the best policy and everything else will fall in line," said Sandweg, who also served as the Director of Immigration and Customs Enforcement (ICE) under former President Barack Obama. "That's where the administration finds itself again: they're not moving fast enough for the folks on the left and they're moving too slow for folks on the right."

Sandweg added the United States is "more than capable" of handling the situation at the border.

"We'll be able to handle it," Biden said earlier this month when asked if there is a crisis at the border.

Cornyn and Cueller, along with Democratic Sen. Kyrsten Sinema of Arizona and Republican Rep. Tony Gonzales of Texas, urged DHS to "quickly take action to vaccinate all DHS law enforcement officers and agents."

"As you know, DHS's law enforcement officers are at significant risk of contracting COVID-19 due to their work with detained and vulnerable populations," they wrote. "The recent growing surge in migrants crossing the southwest border has only amplified that risk."

During a conference call with reporters on Friday, a senior administration official said "the state of Texas has not been as cooperative," speaking about offering FEMA assistance grants to local cities on the border and other organizations.