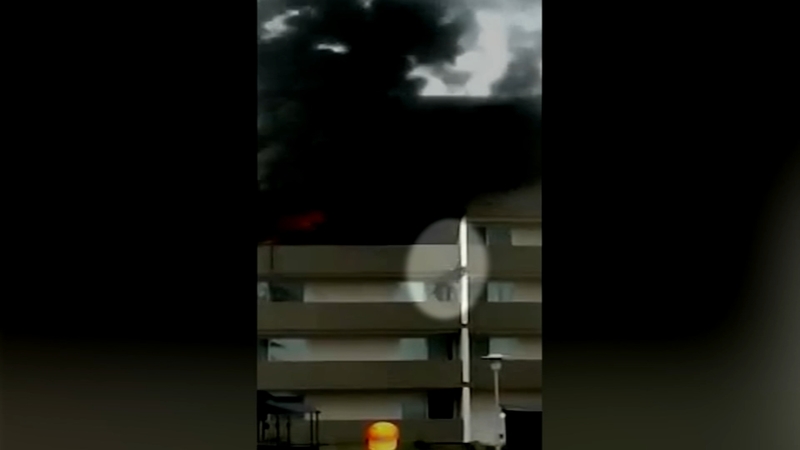 RICHTON PARK, Ill. (WLS) -- At least five people were hurt after a fire broke out Wednesday inside an apartment in south suburban Richton Park.

The fire sent five people, including one firefighter, to the hospital, with most suffering from smoke inhalation. No one suffered life-threatening injuries, including one man who fell from a balcony as he tried to escape.

With smoke pouring out of the 4th floor unit, firefighters set up a ladder truck around the other side of the building and helped residents escape. Before firefighters arrived, a passerby got cell phone video of the fire and a trapped man on the balcony of the unit where the fire started.

Eventually, the man tried to climb down from the balcony to safety, but he lost his grip and fell three stories to the ground.

Johnny Barrett was asleep in the unit directly under where the fire started. He said as smoke started to seep in, he eventually woke up to pounding on the door but never heard a smoke alarm.

"It's pretty scary," he said. "I could have died in my sleep from the smoke alone."

As flames and smoke travelled up the building, firefighters evacuated all of the floors. Many of the units suffered smoke and water damage and it will take some time before residents can return.

In the meantime, many of those evacuated waited in the parking lot, hoping to get back in to retrieve some belongings. Most are grateful no one was killed, but still shaken by the experience.

"I was confused because I never heard a fire alarm that would tell me there was something going," resident Leonie Nche said.