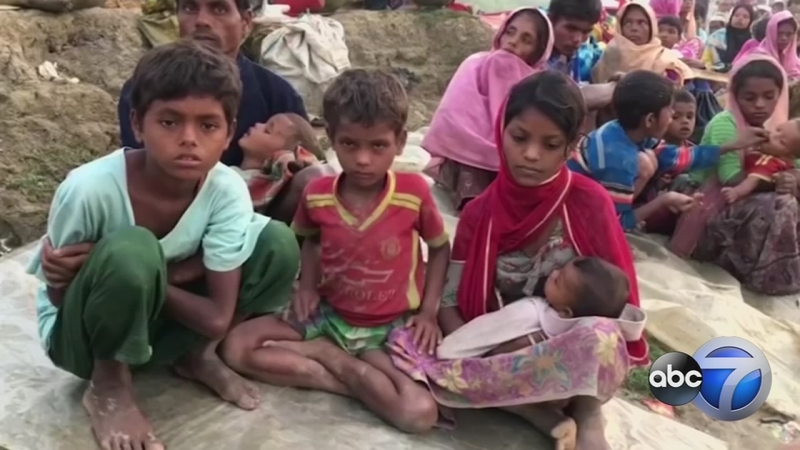 CHICAGO (WLS) -- Tragic images from Myanmar are difficult to watch.

They show the plight of the Rohingya people, described by ABC News as a Muslim minority in the country also known as Burma. The Rohingya were stripped of citizenship by Myanmar's government in 1982, though they've lived there for generations.

According to several reports by ABC News and the Associated Press, the Rohingya people have witnessed mass shootings, women and girls raped, and villages burned, all at the hands of the military.

According to the AP, more than 620,000 Rohingya have fled to Bangladesh since late August after a group of Rohingya rebels attacked police, triggering what the Myanmar military calls "clearance operations."

This oppression is not new; over the years, some Rohingya people have sought refuge in the United States. But challenges still abound.

Nasir Zakaria left Myanmar in the 1990s, finally making it to Chicago in 2013. He sees firsthand the struggle for Rohingya families in America.

"If they go to hospital...they need translate," he pointed out.

Zakaria steps in at the Rohingya Culture Center on West Devon Avenue, which he opened last year.

The storefront space provides English Second Language classes, Quran teaching for children and homework help as well thanks to Zakaria and a team of volunteers.

"Benefits were being cut off because they didn't know how to read the mail and respond to them in a timely manner," said volunteer Laura Toffenetti of her early interactions with the community.

For the roughly 400 Rohingya families in Chicago, this makeshift school and support center has become something more.

Even as some Rohingya people have found a new home here in Chicago, they are constantly reminded of the ongoing atrocities in Myanmar, wondering if their loved ones are safe.

"In Burma, no future right now," said Zakaria pointedly, who shared that his parents still live there; he said they are not allowed to leave.

They call him from Rakhine State in the middle of the night, describing horrific scenes.

Sen. Durbin and Rep. Schakowsky traveled to Myanmar and Bangladesh recently to see this first hand. They will be meeting with the Chicago Rohingya community this Sunday. The U.S. and United Nations have called this crisis "ethnic cleansing."

During his visit to Myanmar this week, Pope Francis did not go that far, speaking only of the need for peace and respect for all religious groups -- but never specifically mentioning the Rohingya.

Zakaria hopes that will change.

"They give us energy...They mean Rohingya people are not alone," Zakaria explained of the impact such verbalizing would have for his community.

Ultimately, Zakaria wants the Rohingya's citizenship restored so the diaspora may return home and live as equal citizens in Myanmar.