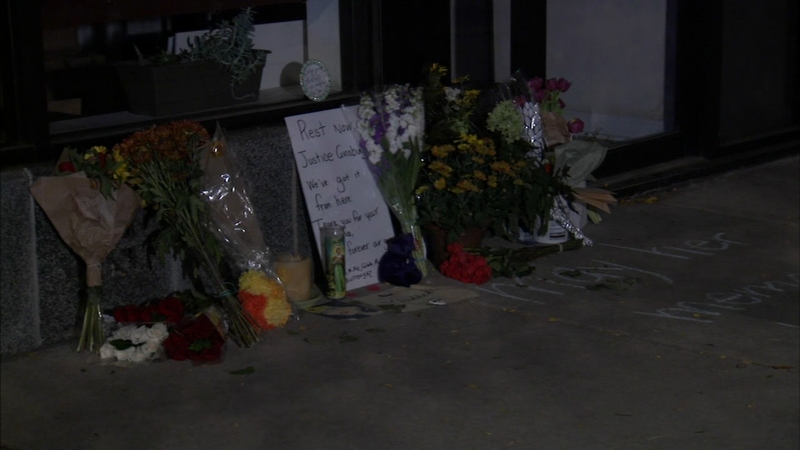 CHICAGO (WLS) -- Ruth Bader Ginsburg was born in Brooklyn but her family has deep ties to Chicago. The Supreme Court Justice passed away Friday at the age of 87 after a battle with pancreatic cancer.

Ginsburg's son, Jim, founded Cedille Records in Edgewater on the city's North Side where he still lives.

Since news broke about her passing on Friday, people have been dropping off flowers and messages in front of the store to pay tribute to the late justice.

As the memorial grew, Senator Dick Durbin weighed on the battle to replace Bader-Ginsburg, saying, "The hypocrisy behind this, and it should be humiliating to all of the Republican senators who joined McConnell four years ago and pledged that they would never do this, never do this in the future and now he is asking them to reverse themselves and to fill this vacancy now," Senator Durbin said.

Chicagoans also came together Saturday night to honor her life and legacy.

The country's most powerful politicians reacted with reverence for Ginsburg's work, and hundreds of mourners blanketed the court's grounds with flowers, but plans for official and private ceremonies are underway.

"I think the process can go very very fast. I will be making my choice soon," Trump said.

Sources tell ABC News, three women judges are on his shortlist for the position with Chicago-based conservative judge Amy Coney Barrett as an early frontrunner.

Senate Majority Leader Mitch McConnell is already promising to back the president's choice saying "it will get a vote on the senate floor."

Over the weekend, House Speaker Nancy Pelosi said she's not taking anything off the table to stop a nomination before the election.

"We have arrows in our quiver that I'm not about to discuss right now, but the fact is we have a big challenge in our country. This president has threatened to not even accept the results of the election," Pelosi said.

Republican can only afford to lose three votes to remain in control of the senate. An Issue some are worried about as a small group of moderate and vulnerable senators could split from the party.

Some senators have already spoken out against the speedy nomination timeline.

Senator Susan Collins said in a statement, "I do not believe the Senate should vote on the nominee prior to the election.

Republicans will have to figure out if they have enough votes in the senate to confirm the nominee before Election day.