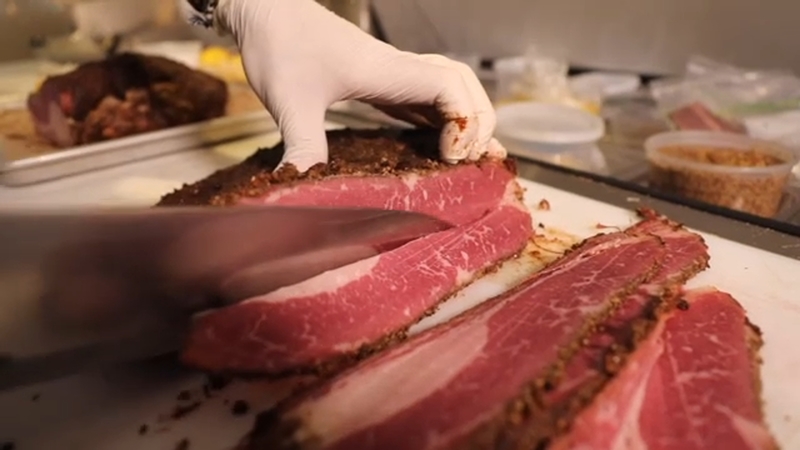 CHICAGO (WLS) -- For years, fans of the Jewish deli have lamented its demise in Chicago.

Only a handful remain, like Eleven City Diner or Manny's in the South Loop.

But a couple of new options have emerged during the pandemic - offering takeout - including one in the West Loop that's sure to be a destination once indoor dining resumes.

Forget whatever image you have in your mind of what a Jewish deli should be. At Rye Deli & Drink - where the motto is "Built From the Grain Up" - the level of commitment is astonishing.

"I think we wanted to take what a deli was, and deconstruct it a little bit," said Chef/Partner Billy Caruso.

Handmade bagels are boiled then baked, using stone milled organic grains from downstate. Creative flavors include Thyme and Sea Salt or a seed-smothered Everything. Even the schmears are different. No cream cheese here.

They whip in flavors like black pepper and parsley or melted leeks.

Cured and smoked brisket gets extra attention too.

"We took the idea of pastrami and corned beef and I just added a little bit of our twist to it. I think most people brine pastramis for a certain amount of time, we do ours for 21 days and we smoke ours for 12 hours. We wanted that bark and that crust," said Caruso.

For their Rueben, it's heated on the griddle with sauerkraut and gruyere cheese, then briefly broiled to melt the cheese. Finally, the mess is stacked on seeded rye that's been slathered with grainy mustard. And then there is the matzo ball soup.

"Everyone talks about it being medicine and one of the most homey things they think about as far as the Jewish deli goes," he said. The broth is a deep auburn, the result of a long, steady boil, loaded with chicken and root vegetables. In addition to matzo, eggs and olive oil, Caruso adds blue cornmeal.

"Changing with the seasons, the corns change color throughout the season and we wanted to incorporate that into the soup," said Caruso.

And how often do you see a seasonal salad on top, containing assorted beets, parsley and watermelon radishes?

"Matzo meal is essentially unleaved bread that's ground into meal that people just throw into a soup and we wanted to take that to a different level," he said.

So Rye is definitely not your grandfather's idea of that Ashkenazi Jewish deli from a hundred years ago. They don't celebrate schmaltz and gribbenes. What they do focus on - and what will become evident when they allow dining in again - is a cocktail program, a gathering place; a place that sources its ingredients carefully and that offers deli food

that's a little bit healthier than what grandpa might have had a couple of generations ago.

The deli is only doing takeout, for now, Thursday through Sunday.