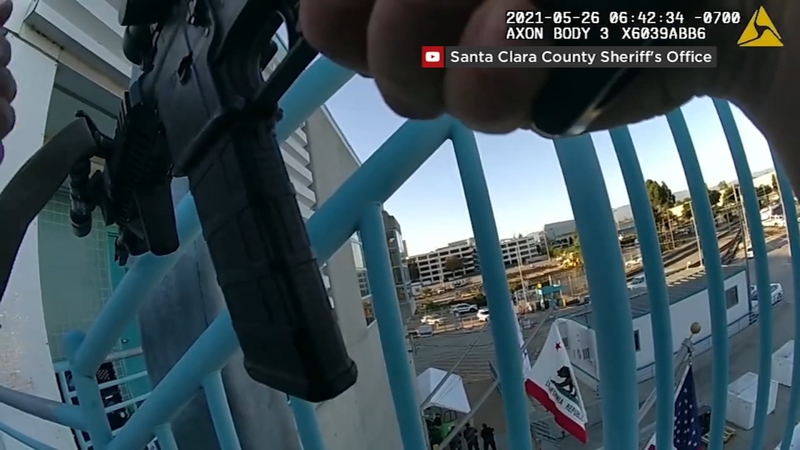 The video can be seen here.

A sheriff's deputy, sheriff's sergeant and three San Jose Police officers make up the team of first responders who were on a mission to locate and stop the active shooter at the VTA rail yard. The gunman would later be identified as Samuel Cassidy.

In the video, the team reaches the third floor of "Building A" when a VTA employee is scene opening a door and addressing them.

"Get your hands up," one officer yells.

The VTA employee hands over his key card. This turns out to be a lifeline, giving the first responders all important access inside the building.

"As the contact team is moving through that dispatch center, one shot is heard," Lt. Aaron Simonson with the sheriff's office described, during a press conference on Tuesday afternoon.

In the video, a gunshot is heard. Someone on the team says, "Oh s**t!"

The team of five then follows audible gunshots in search of the gunman.

In the moments that followed, two more gunshots could be heard in the body-worn camera video. Shortly after, the team enters the room where Cassidy's body is. Video edited by the sheriff's office shows the shooter's body, blurred in the distance.

At this point during that deadly morning, Cassidy had already shot and killed several of his co-workers in a separate building - "Building B."

Before law enforcement teams arrived on-scene, surveillance footage showed Cassidy calmly making his way toward Building A. There, he murdered more of his co-workers, then shot himself twice.

"Oh, the gun," one responder is heard saying. "I see the gun in his hand right there!"

Lt. Simonson explained, "At 6:44:51, the Contact Team observes a gun in the injured person's hand. The Contact Team has to ensure that the person down isn't still a threat."

More than 100 VTA workers were on-site that morning.

Sheriff Laurie Smith credits the bravery of the Contact Team, Rescue Task Force, and all responders on-scene for preventing more deaths that day.

Their work was part of an Active Shooter Protocol- a policy which involves all law enforcement training together and working together.

"It was put into action by the sheriff's office and San Jose police officers who hardly spoke a word to each other," Sheriff Smith said. "They knew what their job was. They did their job and actually confronted the suspect that took his own life."

Nine were shot and killed by Cassidy. Some of the victims, praised for attempting to save others.

"We'll never forget those innocent victims whose lives were taken by a crazed coward," the sheriff told reporters.

When asked about a possible motive, Sheriff Smith said that part of the investigation was still on-going.

The sheriff's office said Cassidy first shot himself underneath his chin. They said the fatal shot was to the side of his head.

The last gunshot was likely the one that took the suspect's life when he died by suicide.

The coroner released a report shortly after the bodycam video was made public saying Cassidy's cause of death was "multiple gunshot wounds of the head."

"Although rare, this can occur in suicides in which the first shot to the head was not immediately fatal," the coroner said.

Today we are learning more about the 9th victim of the VTA mass shooting, Alex Fritch. His widow spoke to ABC7 News about their last moments together.

Earlier on Tuesday, VTA officials announced that light-rail service will remain shut down to give transit employees a chance to mourn the loss of their coworkers.

"We're asking our passengers to please be patient and we're trying to work as hard as we can to get them to where they need to go, " said VTA spokesperson Stacey Hendler Ross.

While the community continues to mourn, some wonder if the tragedy could've been prevented.

State Senator Dave Cortese, who represents San Jose, is calling for the expansion and improvement of California's red flag laws, which are meant to prevent gun violence and mass shootings.

"Making sure that every Californian understands that that tool is available to them, that they can intercede, that they can let the appropriate authorities or officials know when they detect something is amiss with somebody without stigmatizing anybody, without breaching privacy," explained Cortese.

A fund has been set up by Working Partnerships USA and the South Bay Labor Council to help provide support for the victims' families.

"We've got to step up and continue to step up to support these families and families like them."