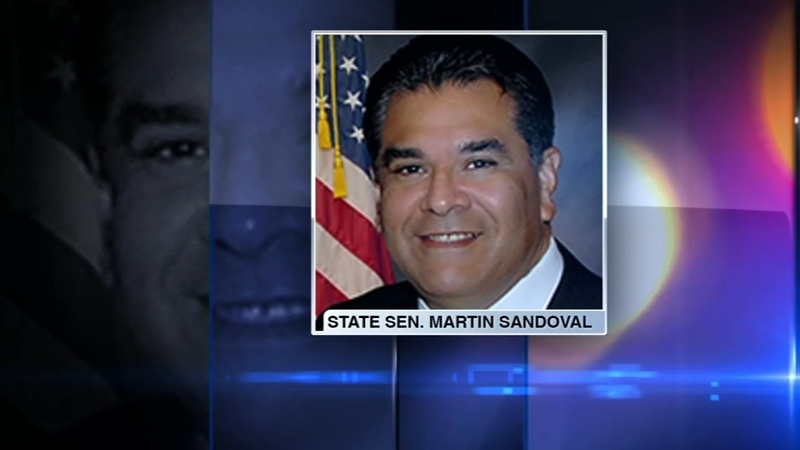 Around lunchtime FBI agents hauled boxes of material marked evidence out of Sandoval's office in the state capitol in Springfield. Agents also raided his district office in Cicero and home in Chicago's Gage Park neighborhood.

Sandoval has represented the state's 11th District since 2002. His district covers the city's south and west side, and overlays a chunk of State Speaker Michael Madigan's constituency. Sandoval was first elected in part through the efforts of the now-defunct Hispanic Democratic Organization. He got a Chicago Public School in his sister's honor built near his home, and has focused on immigration and small business issues.

Business owners near his district office were surprised by the raids.

"We saw the cameras coming up over here," said Harry Lamiot, Dell Plumbing Company. "To tell you the truth we never see him, very much of him, they are kind of private it seems, at least for us."

ABC7 Eyewitness News knocked on the senator's residence after calls to his office seeking comment went unanswered. He was not there, but more FBI agents were. They emerged just after 3 p.m. with boxes marked evidence, as well as what appeared to be home office supplies and bookkeeping equipment. The Chicago FBI would only say they were engaged in "law enforcement activity."

"He has always been helping the community, and even if we just walk by him he will say 'good morning' or something that'll make us feel like a good community, like a big family," said neighbor Ivonne Santoyo.

There are many theories floating around as to what the investigation is about, but no official statement by the FBI or Sandoval has been released. Senator Sandoval is the chairman of the Senate Transportation Committee and as such was poised to play a big role in the implementation of a $45 billion state construction program signed into law by Governor JB Pritzker earlier this year.
Report a correction or typo
Related topics:
politicschicagogage parkcicerospringfieldgeneral assemblyfbiraid
Copyright © 2021 WLS-TV. All Rights Reserved.
TOP STORIES
AL police investigating death of former NFL player, Chicago native
Gunmen on jet skis open fire into the air at beach near Cancun hotel
Man killed outside Chinatown school ID'd
Lake Geneva Ice Castles' construction begins in Wisconsin
Chicago police have toolkit to prevent repeat chaos in the park
Jussie Smollett charges to be considered by jury as trial wraps up
Scott Peterson resentenced to life in prison for wife's murder
Show More
IL reports 6,658 new COVID cases, 14 deaths
Michael Strahan's Blue Origin space flight pushed to Saturday
Tiger Woods to make return from car crash at PNC Championship
Omicron detected in Chicago as IL COVID hospitalizations surge
Blackhawks' Khaira responsive after being stretchered off
More TOP STORIES News