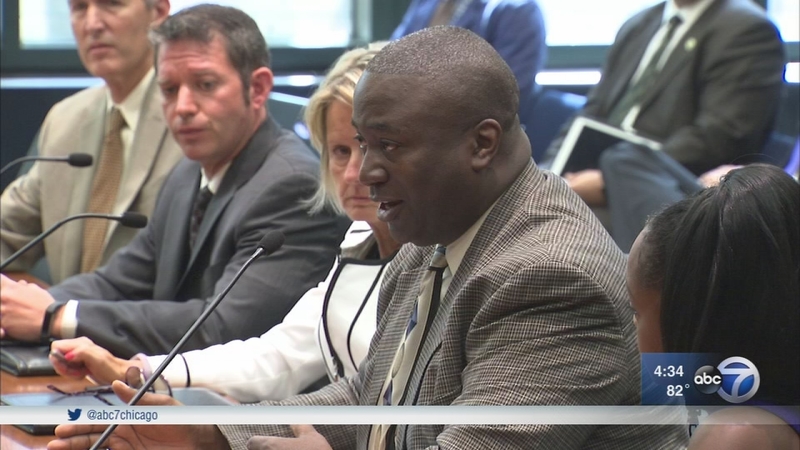 CHICAGO (WLS) -- School superintendents from across Illinois told lawmakers Wednesday that the governor's amendatory veto of a school funding bill will cost their district's money.

Meanwhile, the Senate and House plan to meet next week to vote on overriding Rauner's veto. The Senate is scheduled to meet Sunday and the House will convene at 11 a.m. Wednesday, which happens to be Governor's Day at the Illinois State Fair.

"We will not accept the governor's amendatory veto. What we will seek to do is to override his veto on Senate Bill 1, with or without a compromise," said Sen. Andy Manar, D-Bunker Hill.

State aid checks were supposed to arrive this week, but Gov. Bruce Rauner's action delayed that. During the hearing in Chicago, which was held by Democratic lawmakers, the superintendents aired their concerns.

"Right now we don't know what to do because they're due money tomorrow and there's no way to get it appropriated," said Supt. Lonny Lemon Oak Grove District 68.

The superintendents said that if the veto is not overridden, they could be left in a financial lurch. They believe the original Senate bill would have done a better job of providing more equitable funding.

At issue is Senate Bill 1, which would have provided more money to every school district in Illinois, but the governor used his amendatory veto to rewrite the bill, eliminating legacy pension payments for Chicago. The governor said that money should instead be redirected to classrooms around the state.

"I'm glad they're holding meetings. I hope that they vote to uphold my amendatory veto. It's the right thing to do. I think SB-1 as it originally passed is unfair to children around the state," Rauner said.

However, some administrators disagree.

"It seems like each one of the amendatory vetoes is going against exactly what SB-1 was designed to do, which is to provide equity for all students in the state of Illinois," said Chris Bobek, business director of the Grayslake District 46.

"It looks like at a very rough and light estimate instead of getting an additional half million dollars we would definitely be losing at least that half million dollars. Most likely more," said Supt. Nathaniel Cunningham, of the Crete-Monee District 201.

The state board of education ran the numbers to determine the financial impact of Senate Bill 1 and sent to the governor on Monday, however, it was later learned Tuesday morning that the state Department of Revenue had sent bad information. The numbers have to now be re-calculated.