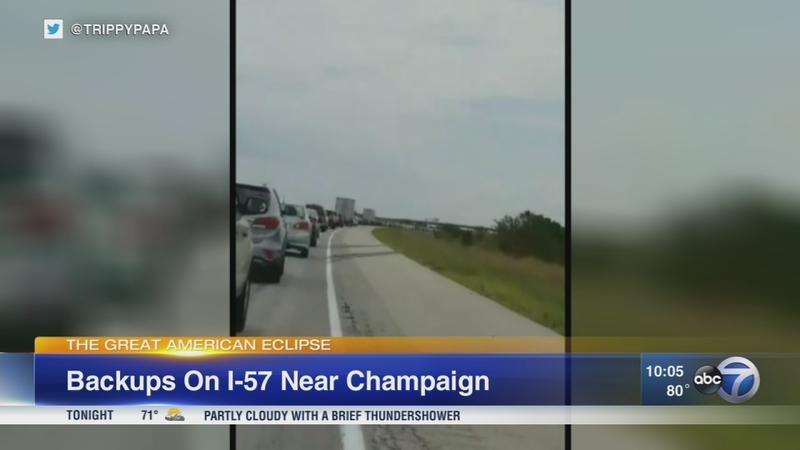 CARBONDALE, Ill. (WLS) -- Solar eclipse hopefuls are expected to flock to the small town of Carbondale in southern Illinois, which is in the path of totality for Monday's historic event.

On Sunday, one day before the solar eclipse, a festival-like atmosphere took over the city with music stages, children's activities, food tents. About five miles north of town, a Moonstock Festival is taking place with headliner Ozzy Osbourne.

However, the crowds were not as big this weekend as expected, said Gary Williams, the Carbondale city manager, Sunday afternoon.

"With the eclipse being on Monday, we kind of thought people might migrate toward Carbondale through the weekend, Williams said.

However, late Sunday, traffic was backed up for miles en route to Carbondale on Interstate 57 at Champaign, according to an Illinois State Police tweet at 7:13 p.m.

Traffic to the eclipse in Illinois is insane. We're still 5 hours away pic.twitter.com/sXcNrAllvi


The size of Monday's crowd is still unknown.

Are you going to watch the eclipse tomorrow? If so, where? Best conditions will be in Southern Illinois. pic.twitter.com/8HN11plXwp

He said it has been a two-year effort to plan for the eclipse.

"It's been such a great feeling to kind of see the fruits of all our labor and all the hard work that so many people put into this," Williams said.

While restaurants in downtown Carbondale have reported an uptick in business, many solar eclipse chasers are scattered throughout the area. Regardless of the spot, the atmosphere is festive.

"We're here with these guys, we've never met them before, we're 100 feet away from our campsite, they just called us in and said 'hey you want to have a beer?' This is so much fun," said Lois Harrison, who is camping in the area for the eclipse.

A heat advisory was issued for Carbondale until Monday, with temperatures feeling about 105 to 107 degrees. During the eclipse, the temperature could drop a few degrees.

People in the Chicago area will see nearly 90 percent of the sun eclipsed, however, clouds could hinder visability.

In Chicago, Adler Planetarium is offering free admission on Monday along with several activities. At the Chicago Botanic Garden in Glencoe, a work entitled "Eclipse," by composer Mischa Zupko, will be performed. The composer-in-residence at the Music Institute of Chicago says he named the piece only after violinist Sang Mee Lee told him the convergence of sound strongly suggested an eclipse.

ABC News will have s special report for the Great American Eclipse starting Monday at noon. ABC7 will also have a special report on ABC7Chicago.com and the ABC7 Facebook page at 1 p.m. Monday.

Many people from Chicago are heading down to Carbondale for one of the best views in the country.

Jesse and Larry preview the solar eclipse from Carbondale.