WLS
By By: Chuck Goudie and Christine Tressel 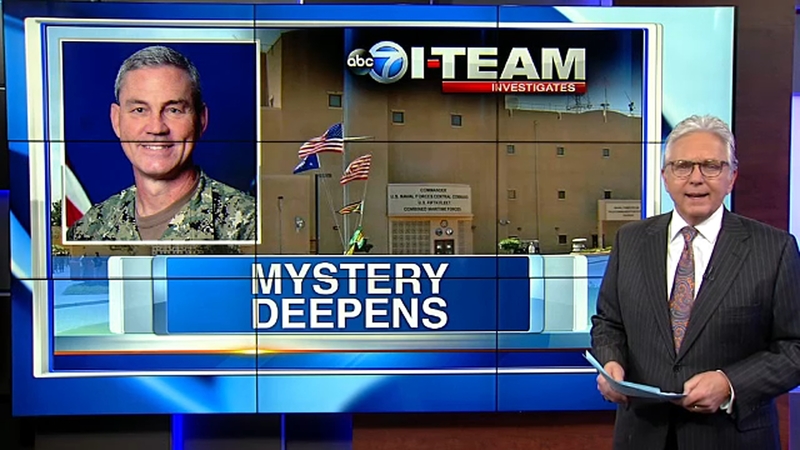 The mysterious death of America's top admiral in the Middle East is the focus of an investigation by the United States Navy's Criminal Investigative Service (NCIS) and police in Bahrain, where his body was found.

Vice Admiral Scott Stearney, 58, a Chicago native and head of the Navy's famous Fifth Fleet, "took his own life" according to investigators familiar with the matter.

Within a short time of Stearney's body being found, Naval Chief of Operations Admiral John Richardson said there was no indication of foul play.

However, there also have been no details of the three star admiral's death provided by military officials or the Bahraini Ministry of Interior that is assisting on the investigation. Neither U.S. nor Bahraini officials have said exactly where or when the admiral was found, who found him, the cause of death or any other specifics that might clear the cloud of a deepening mystery.

Stearney attended high school in north suburban Niles. His name is embossed on the high school's list of military veterans on display in a main corridor.

"We at Notre Dame College Prep are saddened to hear of the passing of Vice Admiral Scott A. Stearney, a 1978 graduate" school officials said in a statement. "We extend our deepest sympathies and prayers to the Stearney family, as well as Scott's U.S. Navy family and friends. His name will remain, with the utmost respect, on our Military Wall forever."

He also holds a 1982 economics degree from Notre Dame University in South Bend, Indiana and joined the U.S. Navy shortly after graduation from NDU.

"Scott Stearney was a decorated Naval warrior. He was a devoted husband and father, and he was a good friend to all" said Admiral Richardson.

At the time of his death, Stearney-whose nickname and aviator call sign was "Sterno"-had 20,000 American and coalition sailors under his command in one of the world's most critical choke points encompassing the Persian Gulf, Red Sea, Gulf of Oman, and the Upper Indian Ocean. He was just promoted to the Fifth Fleet position last May.

The Navy has appointed Vice Admiral James Malloy, a deputy chief of naval operations, to be interim commander of the Fifth Fleet.

Stearney, who was married with children including a son in the Navy, had a storied career. He was a TOP GUN pilot; had collected more than 4,500 mishap-free flight hours; made more than 1,000 landings on aircraft carriers; had commanded an aircraft carrier strike group and served in Kabul, Afghanistan as chief of a joint task force.

"This is devastating news for the Stearney family, for the team at Fifth Fleet and for the entire Navy," Admiral John Richardson, chief of naval operations, said in a video statement.

Admiral Stearney was a key player in the delicate U.S. relations with Iran.

On September 9 during a conference call with Arab media, he admonished Iran for its destabilizing tactics and vowed to use his fleet to keep peace in the region-while still expressing optimism about the Navy's presence and capabilities. He said the Fifth Fleet was engaging in a training exercise in the fall that was designed to "show the Navy and our partners are capable of operating and protecting critical choke points and waterways throughout the region."