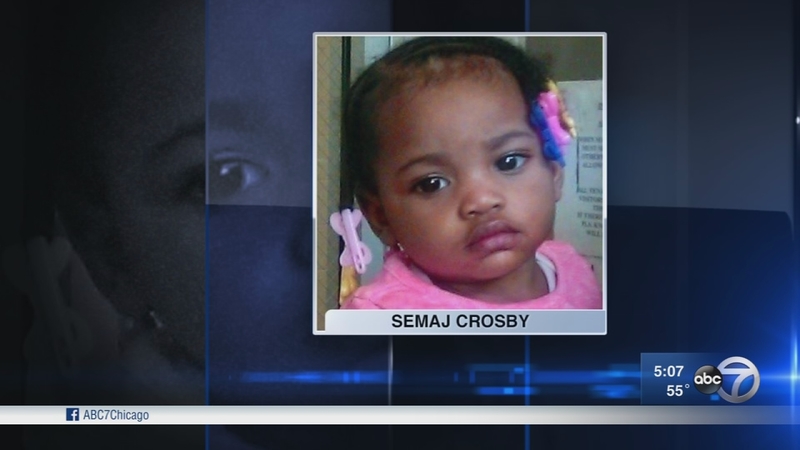 JOLIET TOWNSHIP, Ill. (WLS) -- An Illinois judge is demanding to know what state child care workers did to help the family of a 1-year-old girl who was found dead in their home.

After an extensive search outside the home, authorities found the body of 16-month-old Semaj Crosby under a couch in the home.

Hours before her disappearance, investigators associated with the Department of Children and Family Services had been in the home following up on an investigation into alleged child neglect. Will County Judge Paula Gomora questioned why the agency failed to remove the children from the home after seeing the conditions.

During the hearing, Gomora said DCFS caseworkers missed obvious signs of trouble in previous visits to the home.

Pictures of inside the home show the living conditions that the Will County Land Use Department described as "uninhabitable." Authorities said the house was infested with bedbugs and roaches. Garbage was everywhere and the home had no smoke alarms, but the family continued to receive services from the state.

A DCFS official said in a Senate hearing Wednesday he believes the agency followed proper procedures by leaving Semaj and her siblings in the home with their mother.

But according to Will County, the home structure was considered unfit for human occupancy, with unsanitary conditions both inside and outside the home.

No one directly involved in the investigation into neglect will comment on the case, but the family had previously been investigated for alleged abuse four other times, all of which were determined unfounded by the agency.

Judge Gomora placed Semaj's siblings in the custody of other family members or with the DCFS.

Investigators have filed no charges in the toddler's death.

The coroner is awaiting further test results to determine what caused her death.