Serena Williams opens up about childbirth nightmare of blood clots 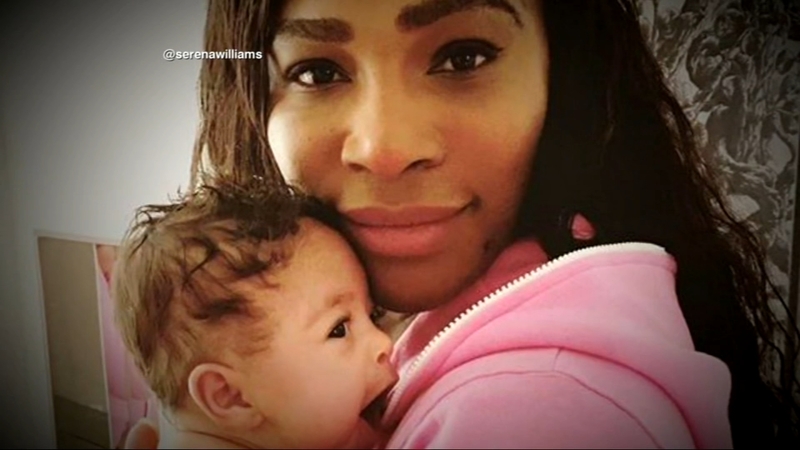 Serena Williams says she had health scare after baby's birth

NEW YORK, N.Y. -- Tennis star Serena Williams is opening up about her medical ordeal giving birth and the life-threatening complications she experienced afterward.

"So, we're leaving the hospital after six days, we had a lot of complications but look who we got. We got a baby girl," said Williams in a social media video posted after she gave birth to baby Alexis Olympia Ohanian.

Williams didn't detail the words "a lot of complications" -- until now.

In an interview with Vogue magazine for its February issue, Williams said after an emergency caesarean section, she developed blood clots in her lungs. She has a history of blood clots.

The clots set off coughing fits, which caused stitches on her C-section incision to pop. Then doctors discovered a large clot in her abdomen.

According to the article, the tennis superstar "spent the first six weeks of motherhood unable to get out of bed."

ABC's chief medical correspondent Dr. Jennifer Ashton says complications like that are rare, but they do happen.
"And they can happen to an elite athlete, or anyone, regardless of the doctor or anything else," says Dr. Ashton.

"Pregnancy and childbirth are an athletic event. It doesn't mean an elite athlete can breeze through," she continued.

Doctors say Williams' experience should remind women to take care of themselves during pregnancy.

Williams returns to tennis in March.

Her previous blood clot experiences have been equally dramatic.

Days after winning Wimbledon in 2010, Williams cut both feet on broken glass while leaving a restaurant, leading to two operations on her right foot.
Then she got clots in her lungs and needed to inject herself with a blood thinner. Those shots led to a pool of blood gathering under her stomach's skin, requiring another hospital procedure.

The 36-year-old Williams, who is married to Reddit co-founder Alexis Ohanian, has not competed since winning her 23rd Grand Slam singles title at the Australian Open in January 2017.

Williams is skipping this year's Australian Open, which begins next week.

Williams said in the Vogue story that she has her sights on getting to 25 major titles, which would break the all-time record of 24 held by Margaret Court.