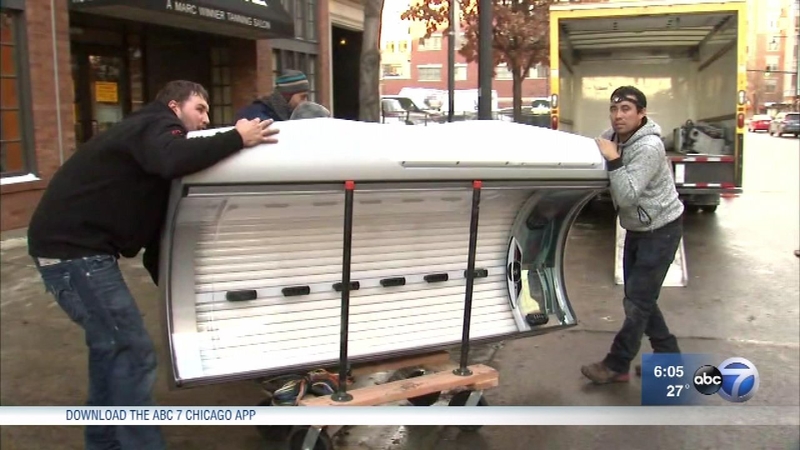 CHICAGO (WLS) -- An accused serial rapist is being evicted from the West Loop building where he operated a tanning salon.

Marc Winner is free on bond, even though prosecutors have called him a "threat to the safety of women."

Ever since Winner was charged with the first of four rapes last spring, the owner of the space where Winner had his tanning salon has been trying to get him out.

"Well our life has been put on hold trying to vacate the space," landlord Van Tomaras said.

Tomaras said he didn't know Winner was going to move Tuesday, only that Winner had until New Year's Eve to get out. A crew was seen breaking down the tanning beds and moving them into a rental truck.

Inside the tanning salon, authorities say 45-year-old Winner met his victims as either employees or customers. In each case, according to the charges, the tanning parlor owner drugged his alleged victims and then sexually assaulted them.

The I-Team first reported on this case last spring, when Cook County prosecutors had Winner on just one charge, but believed he was a serial rapist with a trail of numerous victims spanning more than a decade.

"My brain just doesn't want me to recall it. It's protecting me. I do recall being raped, I just don't recall how much time it was," alleged victim Lesley Barton said in April.

Winner went after our crew while we were reporting on his legal situation at the courthouse. He was held without bond for a time, but eventually had bond set and posted more than $60,000 for his release.

Neighbors of his West Madison Street salon said they are not sorry to see him go.

"I personally have had problems with him for well over 15, 18 years - however long he was here. It was just very disturbing that it's taken so long when this city and everyone knew that something was going on," neighbor Chris Sporina said.

Winner was believed to be inside the former tanning salon Tuesday evening, but does have a 7 p.m. deadline to be off the streets and in his home, according to the terms of his bond. He has pleaded not guilty to all the charges.