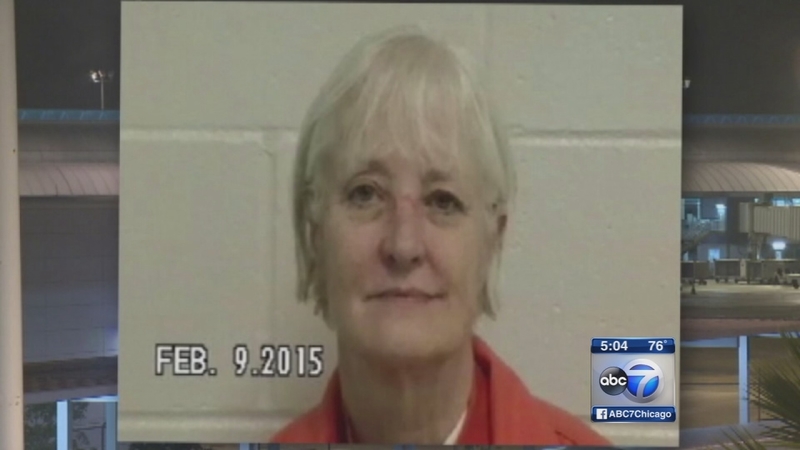 CHICAGO (WLS) -- Marilyn Hartman is heading to trial as a judge set her bond at $100,000 Thursday in an effort to make sure her stowaway days are over.

Dressed in blue Cook County Jail garb, the so-called "serial stowaway" is back in court again after authorities say she tried to sneak aboard yet another airplane.

"I'm not exactly sure what her issues are or what's driving her behavior but she has been offered a lot of help," said Cook County Assistant State's Attorney Jennifer Coleman.

Clearly frustrated, Judge William Raines told the 63-year old, "I'm a little perplexed. I thought we agreed never to see each other again."

The Chicago native's appearance in court Thursday comes after police arrested her again at both the city's airports.

Prosecutors say the first incident happened at Midway Airport last Friday after Hartman walked up to an officer there and asked, "Do you know who I am? I'm a celebrity," after buying a valid ticket.

"And he also escorted her to the plane to make sure she didn't wander to any other secure areas," Coleman said.

But once on-board, passengers say she stood up and said they're at war and she didn't feel safe without her helmet. The pilot returned the New York-bound flight to the gate, where Hartman was escorted off the plane.

The very next day, Hartman was detained at O'Hare Airport. Police say she did not have a ticket, but tried to slip past security.

She now faces criminal trespassing charges along with violating her bond on the previous charges.

When Hartman was released from Cook County Jail last week after being arrested for her repeated attempts to bypass security at O'Hare and Midway, she promised to stop.

After Hartman refused electronic monitoring or placement in a residential treatment facility, the court says it has no choice but to send her case to trial.

"So the only option we have is to offer her jail time because there's nothing else we can do when she's not willing to accept the help that's been offered to her," Coleman said.

Hartman lives off of social security and has lived in homeless shelters because she claims to have no family.

She has said that she feels safer in airports than on the streets and has repeatedly tried to sneak onto planes and enter restricted areas of airports since 2010. Her next court date is July 23.