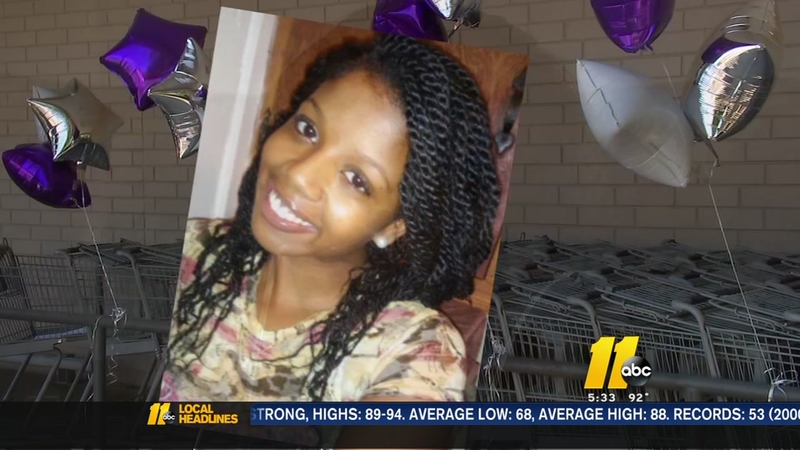 Shaekeya Gay was gunned down outside her job at Food Lion on Saturday, Henderson Police say, by a bitter ex-boyfriend who ABC11 discovered had violated a restraining order.

On Tuesday, outside the Food Lion where she was employed for a year, there is a makeshift memorial with flowers and written words of comfort. The items stand where the 23-year-old was gunned down while on her break.

"Loving him took her life," Shronda stated, her voice quivering with emotion.

Marcus Tyrell Hargrove, 23, her estranged live-in boyfriend of two years, is accused of pulling the trigger.

Henderson Police say while Gay was taking a break, Hargrove pulled out a gun and shot her in the head.
On Tuesday, ABC11 discovered in court documents that Hargrove violated his restraining order.

Two weeks ago, Gay filed the order after she alleged the suspect pistol-whipped her at their home.

The attack was so severe that doctors put staples in her head.

Gay's cousin, Shronda went with her to court.

Gay died at the Duke Hospital on Monday, which is on the same day Hargrove turned himself in to police.

Family members say Gay is a former officer in the Navy and had just gotten accepted into college at Strayer University.

This Sunday would have been her 24th birthday.

"She had her whole life. So much that she could do. I just hope he gets everything he deserves and more," Shronda said.

The family has set up a GoFundMe page to help with funeral arrangements.

In honor of Gay's birthday, on Sunday, the family will hold a vigil near the Food Lion parking lot.

"Our thoughts and prayers are with the family, friends and co-workers of our valued associate, Shaekeya Gay, as a result of the tragic shooting on Saturday evening. We continue to work closely with local authorities who are investigating this matter. During this time, we ask for the privacy of our associates who are coping with this very sad situation."

Though Hargrove is in custody, the Henderson Police Department is asking that anyone with additional information or who may have been at or near the Food Lion to please contact Detective Simmons at (252) 430-4234.