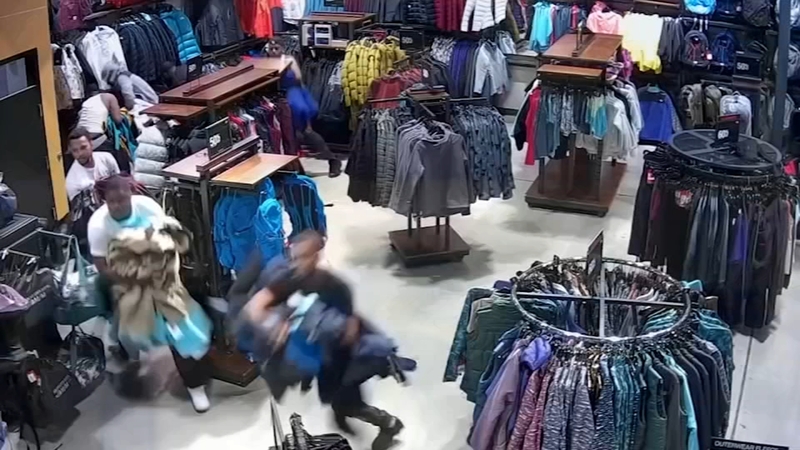 CHICAGO (WLS) -- Cook County State's Attorney Kim Foxx is facing criticism for the way her office is handling shoplifting crimes, and it comes at the height of the holiday shopping season.

Thieves have been brazen and bold, scooping up merchandise and walking out of stores. Chicago Police report one of the latest cases happened Friday, Dec. 13, when four thieves entered a retail store in the 1800-block of West Fullerton, and walked away with more than 20 coats in their arms. There are also concerns in Chicago's Loop.

"It's not like when I grew up," said Michael Edwards, president and CEO of the Chicago Loop Alliance, an organization that represents more than 200 stores on State Street. "People are coming in and grabbing armloads of merchandise and walking out of the store."

Edwards said retailers are concerned about Foxx's retail theft policy. After taking office, Foxx raised the felony threshold for theft from $300 to $1,000. Thirty states have set their threshold at $1,000 or more, according to the Pew Research Center.

"We still prosecute retail theft cases," Foxx said. "The difference is they are prosecuted, depending on the amount, as misdemeanors opposed to a felony."

Foxx said gun violence and crimes are her priority, and she has chosen to shift the office's resources to reflect that focus. In 2016, when she was elected, retail theft made up 16% of the cases the State's Attorney reviewed, that's down to 9% this year. In the same period of time, the share of unlawful use of a weapon cases reviewed went from 14% to 23%.

"We've been able to reallocate gun cases for lower level offenses, still prosecuting them, but reallocate those resources to deal with gun violence, which I think benefits all of us, including retailers," Foxx said.

But not everyone agrees that retail thefts should be downgraded, including Chicago Alderman Brian Hopkins. The alderman represents retailers along the Magnificent Mile, and he wants Foxx to reverse her policy decision when it comes to retail theft.

"The people who are victimized by these crimes don't want to hear, 'We're working on something else that's more important,'" he said. "They want to hear, 'We are going to take care of you too.'"

While the alderman calls on Foxx to reverse her policy, Chicago's Loop Alliance has offered solutions to its members. They have told store owners to place expensive items in the back of the store, helping deter anyone who can just walk into the entrance, swipe items, and walk out quickly. They also encourage members to hire extra security. Along with those suggestions, the Alliance has its own ambassadors, hired workers, extra eyes to address a grown concern among retailers.
Report a correction or typo
Related topics:
chicagolooplincoln parkshopliftingtheftchicago crimekim foxx
Copyright © 2022 WLS-TV. All Rights Reserved.
TOP STORIES
5 tax changes that can boost your refund this year
Chicago weather forecast includes snow into Monday | Live radar
17 shot, 3 fatally, in Chicago weekend violence
1 hurt in I-290 shooting in Oak Park: ISP
After the omicron wave, what's next for the COVID pandemic?
Girl, 8, killed by stray bullet ID'd: ME
St. Charles library closes after threats over mask policy
Show More
Can science slow down or reverse the aging process?
Tax filing season starts Monday. What to expect for 2022
Tips on getting back to workout after battling COVID
Russia rejects UK claim of trying to replace Ukraine leader
Sunday Mass at Holy Name Cathedral
More TOP STORIES News