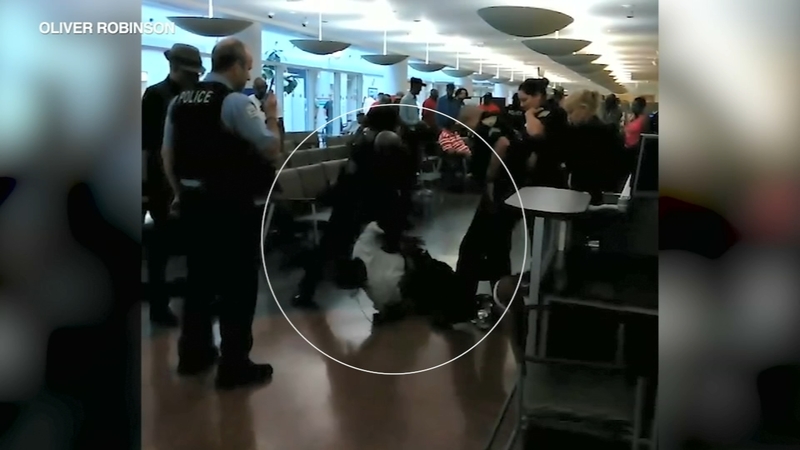 Shots fired at West Side VA hospital, suspect in custody

CHICAGO (WLS) -- A suspect is in custody after shots were fired at a VA hospital in the Tri-Taylor neighborhood Monday afternoon.

The shooting happened shortly after 2:15 p.m. Witnesses said a man, perhaps in his 30s or 40s, was seen outside the Taylor Street entrance to the hospital with what the FBI would only identify as "an assault rifle." The FBI said the man opened fire both outside and inside the hospital. Witnesses said he fired indiscriminately.

Officials said the gunman is not a military veteran. Chicago police said they have had contact with him before but offered no further details.

Bullets struck and shattered glass at the Taylor Street entrance and vestibule. Witnesses said there were dozens of people on the other side of the glass in a vestibule, but because it's a walk-up vestibule that was raised up off ground level, no one was hit by gunfire.

The number of shots the man took was unclear, but witnesses said they saw him reload his gun.

The man then entered the hospital and walked to a pharmacy area about 300 yards from the Taylor Street entrance, but by then gunfire had ceased. The shooter was taken into custody by VA officers without them firing a single shot, the FBI said.

According to the FBI, shots were fired both inside and outside the hospital. He was initially firing at the building, and was still firing when he entered the building, the FBI said.

Video from a witness shows the alleged gunman on the ground inside the facility after officers ordered him to drop his weapon.

"I spoke with him," said Oliver Robinson, witness. "He was walking through, and he was saying 'Who hit me? I'm looking for who hit me?' That's when I told him, 'Hey man, you don't have to go through this, put that down.' And at that time the VA police took him down."