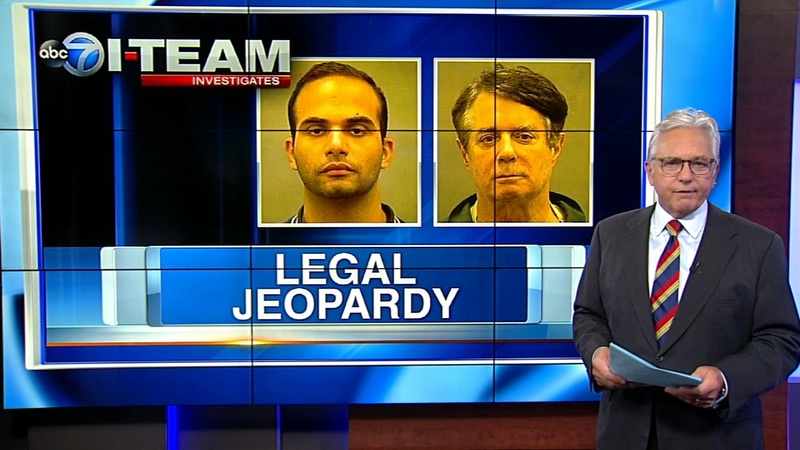 CHICAGO (WLS) -- A Chicago foreign policy consultant to the 2016 presidential campaign of Donald Trump should go to jail because he wasn't fully cooperative with prosecutors after pledging to do so in a plea agreement, authorities said Friday evening.

Northsider George Papadopoulos, 30, is charged with lying to the FBI about his contacts with Russians on behalf of the Trump campaign.

He is to be sentenced in three weeks on September 7 in Washington, DC District Court.

In a Sentencing Memorandum filed only hours before a court-ordered deadline Friday night, government attorneys recommended that Papadopoulos be sentenced to the penitentiary for up to six months. They could have recommended no jail time, and frequently do for cooperators, but note that "in light of the defendant's conduct" and lack of full cooperation, there is a "call for a sentence of incarceration."

A new mystery is revealed in the government's filing tonight: what was on a previously undisclosed cell phone apparently used by Papadopoulos to communicate with a professor under FBI scrutiny? Prosecutors say Papadopoulos hid "substantial communications" on the device until his final proffer session with the government. When asked about the phone, the circumstances and the government's claim, Papadopoulos' wife on Friday night told ABC7 she didn't know about it.

This revelation comes as Papadopoulos is apparently shopping for a new attorney and may try to blow up his plea agreement with federal prosecutors, according to his wife who has mounted a public relations campaign on his behalf.

Mrs. Papadopoulos now says that her husband was entrapped in the Russia investigation and should rescind his guilty plea on charges of lying to federal officers. "It's George's decision" she told the I-Team Friday evening. "In case he drop off the plea agreement (sic) he will be assisted by another lawyer."

She appeared to be leaning that direction in a June interview with the ABC7 I-Team but came out fully in favor of backing out of the plea deal during several national TV interviews Thursday night. Mrs. Papadopoulos said she had been made aware of "exculpatory evidences (sic) that fully justify him to drop off his plea agreement."
During the I-Team interview she said that Papadopoulos "was under scrutiny even before joining the Trump campaign because his ties to Israel were suspicious."
Mangiante Papadopoulos also said her husband "had a target on him because of his work in Israel."

She now claims that there were "shady individuals targeting George with a specific agenda" during the presidential campaign, but it is now known to whom she was referring.

She has also been soliciting on her social media pages for a new attorney to represent her husband. He has been represented by well-known Chicago defense lawyer Tom Breen.
Messages seeking comment left by the I-Team at Breen's Loop office were not immediately returned.

If he backs out of the plea deal made with special counsel Robert Mueller and goes to trial, as his wife now suggests he should, his fate becomes uncertain.

Meanwhile, as the Papadopoulos case seems uncertain, the first case to go to trial for Special Prosecutor Robert Mueller's team remains in the hands of a federal jury this weekend. The Alexandria, Virginia jury in the case of ex-Trump campaign chairman Paul Manafort was sent home for the weekend without a verdict yet.