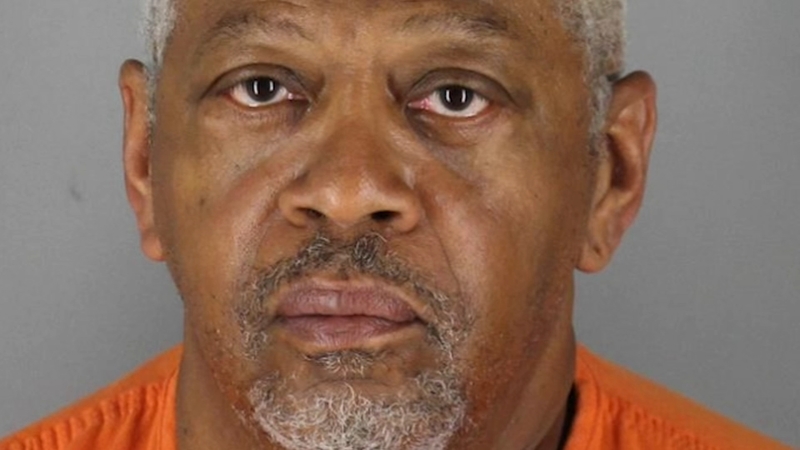 CHICAGO (WLS) -- In the six months to the day since Minneapolis police killed George Floyd, there have been thousands of news reports put out. But Michael Cooper's story is one you've never seen until the ABC7 I-Team report Wednesday night.

In those days right after Floyd died, Minneapolis was on fire and the police were under fire; figuratively for the knee-to-the-neck tactics-and literally by some violent demonstrators.

"Well I was assigned to the CNN crew camera crew from a company that I work for," said Cooper, "just provide protection for them..."

On Wednesday night the I-Team reported the inside story of how Cooper ended up in a mugshot photo and under arrest himself. The ex-Illinois state trooper and licensed private security officer was locked up last May inside Hennepin County jail by Minnesota officers.

The stage was set for Cooper's still-unexplained saga on Friday May 29th, a few days after Floyd's killing.

While on the air early that morning a CNN reporter was arrested for no apparent reason. He was released a short time later, with an apology from Minnesota's governor.

After that incident, a day later, CNN sent in Cooper from Chicago as security backup. He had worked for years as a contract security officer for CNN and other television networks and corporate clients through Thomas Dale & Associates, a Los Angeles-based investigative and security firm.

Cooper retired from ISP in 2005 after a stellar and decorated career, heralded for cracking cold case murders.

He was legally armed and escorting CNN's crew on location as police worked to control looting and street violence.

"We started filming at about four o'clock, at which time I noticed an element, different elements started coming in, of people," recalled Cooper in an interview with the I-Team. "They were dressed all in black; they were carrying bags. They were carrying gasoline, they were totally hidden."

As Cooper and another security agent from the TDA security firm escorted the CNN crew, he said the crowd began to turn hostile.

"They started throwing rocks at the police and the police started, you know, fighting back with rubber bullets, tear gas. We moved to another location, that location became a hotspot, at which time I called the boss to say 'hey look, we're done. It's a little bit too much.'"

At that point Cooper said he directed the crew to move back toward their vehicles that had been parked in a nearby K-Mart lot. That was also where police had been gathering since the CNN crew arrived earlier in the day.

Seeing police cordons at the location, Cooper said he slowly approached the officers with his hands up and his police ID and badge facing them - announcing that he was a retired state trooper.

"They did a felony stop, is what we call it. You know, they had me turn around, they had me walk backwards to him to go to get on my knees," he said. "They had me lie down, put my hands behind me palms up. I had my ID in my hand the whole time, palms up, at which time they approached me, they grabbed my arms, they cuffed me and left me there for a bit."

GOUDIE: "When you first said to them: 'I'm retired state police. I'm working security.' What did they say?
COOPER: Nothing.
GOUDIE: Nothing? No response?
COOPER: No response.
GOUDIE: Is that the first clue that this was not going to end well?
COOPER: Yes...I told them I was armed. They found my weapon-one-on the right side. And at that point they stopped, and I said I have another backup...And at that point, they took that one too.
GOUDIE: And what about the other security man?...was armed as well ?
COOPER: Correct.
GOUDIE: And was white?
COOPER: White, yes...Then I call the captain and she stopped I said, Ma'am, I says, I'm a retired state police officer. I'm here with CNN, with the media. And she looked at me and she says I don't care, she walked away...I never saw one African American state patrol guy. But I was also with, like I said, a producer who was white. He was about, like I say about seven to 10 yards away from me. They saw him, they didn't do anything.

Only Cooper was handcuffed and taken away that day.

"They put me in a holding cell" Cooper said. "So I asked what was I being charged with. They looked on the papers and they said, we have no charges."

Twenty hours later he was released without charges, or an apology. His release even then required the intervention of his company in Los Angeles, and friends in the Chicago legal community, who went back to the Minnesota governor's office - the same governor who had apologized for a similar CNN arrest just a day earlier.

But Cooper said, in his case, there was no public proclamation or anything else. He said nothing has changed in the past six months.

A mugshot and inmate booking sheet were the only documents provided by authorities following I-Team open records requests of the county sheriff, state police and the governor's office. The jail record cites a criminal weapons count and that Cooper was "released pending complaint." But a complaint has never been filed.

Michael Cooper said there was only one explanation for what happened to him.

"Honestly, I didn't want to go this route," said Cooper. "I think it was because of the color of my skin..... I'd do believe that. I'm still trying to cope with it and you know I still wake up thinking about it. How can this happen?"

Cooper - still a lawman at heart - now questions whether some very innocent people are locked up under the law. A feeling he never thought he'd have.

He was considering legal action, but now maintains he would settle for an apology.