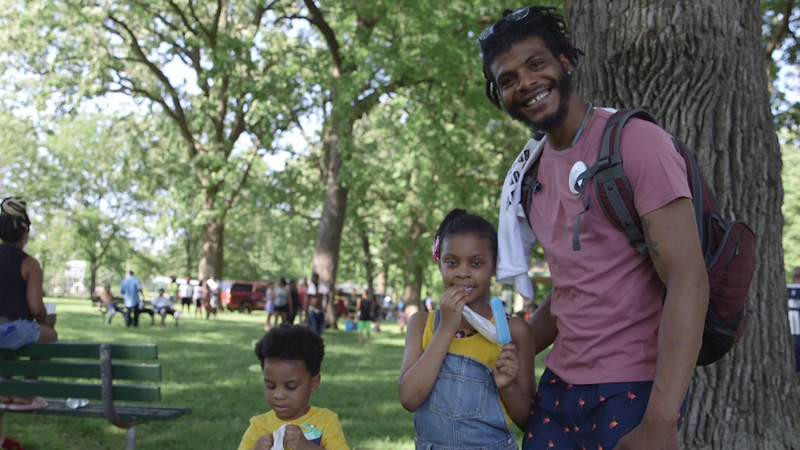 KANKAKEE (WLS) -- Keenan Love only had $9 in his pocket when he left his home on Far South Side of Chicago to make a 46-mile pilgrimage in honor of George Floyd, who died at age 46.

"I just had to find a way to not be like everybody else and protest and make a stand for (George Floyd)," Love said about the demand for justice after a white Minneapolis police officer was captured on video pressing his knee against Floyd's neck for minutes.

Love is originally from Kankakee, which happens to be 46 miles away from the Chicago, marking one mile for every year that Floyd had been alive.

Keenan Love only had $9 in his pocket when he left his home on Far South Side of Chicago to make a 46-mile pilgrimage in honor of George Floyd, who died at age 46.

As the 29-year-old's livestream picked up viewers on Facebook, Instagram and TikTok, friends and family started bringing him food and water. Two women brought him a new pair of shoes when his soles started to wear through.

Eventually police began escorting his walk down the highway, handing off between different departments at each town border.

Near the end of his walk, Love looked behind him and saw hundreds of people he didn't even realize were there.

"That was pure bliss," Love said. "That was the moment that I realized this was bigger than me."

ABC7 spoke to Love at Beckman Park in Kankakee, where he was gathering with friends and family for a barbecue after the walk.

Before the barbecue began, at least a dozen law enforcement officers in local police and county sheriff cars interrupted the gathering because of an unauthorized four-wheeler being ridden around the park.

Love stepped into the situation, speaking with friends and officers to help ease tension. Eventually the police all left the park without towing the four-wheeler or giving a ticket.

"I love the peaceful protest. That's the kind of dude Keenan is," said Tercel Barfield, 27, one of Love's closest friends.

"He always brings positivity to any situation we have."

Love wore a pin during the interview with a picture of his brother, Terrell Love, who he said was killed last July. Love said Tyrell's killing did not involve police, but called it "another senseless death."