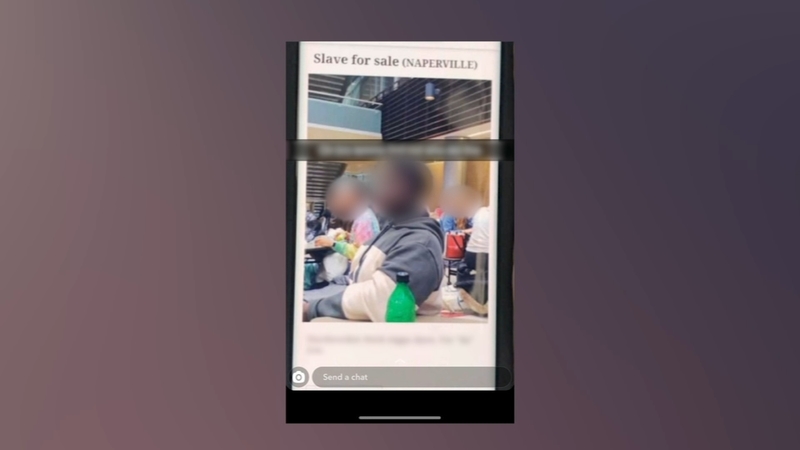 NAPERVILLE, Ill. (WLS) -- School officials in Naperville are investigating a racially insensitive post made to Craigslist that has students at Naperville Central High School concerned.

A Naperville Central student made the Craigslist post that quickly circulated among other students, featuring a picture of an African American student in class with the heading "Slave for Sale (NAPERVILLE)."

"I witnessed it on Snapchat at first, a lot of people were sharing it, saying it was wrong," said student Tejia Gilford.

The incident has outraged many, especially African American students and their parents.

"This is not surprising because if they had a handle on it, these things would not be happening," said Veronica Lewis, parent.

Lewis said her own son has faced discrimination at Naperville Central by other students. Jason Johnson said he has been the victim of racial bullying.

"I look at it as, this is a part of life and you have to keep moving, but at the same time it's got to be dealt with, it can't be slapped on the wrist," Johnson said.

Because of student privacy laws, the district could not say specifically how the student who posted the racist post would be disciplined. While the Naperville Central principal addressed the situation with all students Monday over the loudspeaker, students and parents said more needs to be done.

"I think they need to keep talking about the real issues, how it's important we not have these situations because in 2019 we are still dealing with this and that is absolutely unacceptable," Lewis said.

Naperville Central said as part of the disciplinary process, it follows the principles of restorative practice, which means school administrators and social workers provide follow-up support for the students involved.