Sofia Carson on Fifty50 initiative for Title IX, her dedication to girls and women around the world

Sofia Carson is the host for "Our America: Fifty50," an ABC Owned Television Stations special commemorating the 50th anniversary of Title IX.

LOS ANGELES -- With over a billion streams to date, Sofia Carson has carved out her own distinct path in music, film, television and philanthropy.

Known for her starring roles in "Descendants," "Feel the Beat," "Pretty Little Liars: The Perfectionists" and Michael Bay's "Songbird," she's earned a number of award nominations including Teen Choice Awards and Radio Disney Music Awards. Carson has performed at high-profile events like the 2020 Macy's Thanksgiving Day Parade and launched her own makeup collection with Revlon, where she's a global brand ambassador.

A devoted philanthropist, she is a U.S. Ambassador for UNICEF, the first global ambassador of the Latin GRAMMY Cultural Foundation, a member of the first-ever Ambassadors Council for The Music Forward Foundation and an honorary board member of We Do it Together, a nonprofit production company dedicated to the empowerment of women.

Carson has always had a love for storytelling through music and film and hopes that every song and role she plays has the power to impact audiences, especially young girls. Her song "Loud" was released in early 2022 and has already had a massive impact on audiences across the globe, with countless listeners taking to social media to share their stories of triumphant self-acceptance.

"'Loud' is dedicated to all the women of the world and all the loud voices of change," Carson said.

SEE ALSO: What is Title IX?

The multi-hyphenate talent will be hosting the upcoming "Our America: Fifty50" hourlong special for ABC Owned Television Stations. It is part of The Walt Disney Company's Fifty50 campaign commemorating the 50th anniversary of Title IX, the landmark civil rights law that prohibits sex-based discrimination at educational institutions that receive money from the federal government.

"Fifty50 to me means justice," said Carson. "To be fair and to be just means to not judge based on gender, ethnicity or identity but judged based on who we are as human beings."

On her self-titled debut album, globally beloved singer/songwriter/actress/activist Sofia Carson shares a deeply personal portrait of love and all its complexities. Over the course of 10 magnetic pop songs, Carson details a journey from infatuation to heartbreak to self-salvation, endlessly spotlighting the stunning vocal presence she's shown on the stages of major festivals like Coachella and brought to such endeavors as her starring role in Disney's hit musical-film series Descendants. Revealing entirely new dimensions of her extraordinary artistry, the result is an ambitious and masterfully realized body of work a near-lifetime in the making.

"When I was 11-years-old I was given a songbook that I wrote all my songs in, and on the very first page I wrote: 'I hope that when people listen to my music, they hear their story in mine,'" Carson recalls. "I always knew that with my first album, I wanted to tell a story from start to finish, so I did. I wrote a story about love: about a girl who falls into a beautiful but deceiving love only to get shattered into pieces, but nonetheless, the story about a girl who survives."

Featuring smash singles like "Fool's Gold" (a supremely fierce track that marked her first Top 40 radio hit), Carson's debut album finds her collaborating with an A-list lineup of producers and co-writers, including Rami Yacoub (Selena Gomez, Demi Lovato), Justin Tranter (Lady Gaga, Dua Lipa), and Stargate (Rihanna, Beyoncé). In sculpting the sonic backdrop to her heart-on-sleeve storytelling, Carson wove in elements of soul and R&B and wildly rhythmic pop, noting that she's "always gravitated toward music that makes you want to dance and cry at the same time. Music that moves both your body and soul." But no matter which genre she's inhabiting, Carson infuses each track with a cinematic intensity. "I tend to look at my songs as miniature films that I write in my head and then bring to life," she points out.

Informed by her own experiences in love (and by the stories of those closest to her), Sofia Carson kicks off with "It's Only Love, Nobody Dies"-a hypnotic and high-drama track that sets the stage for the album's exploration of love's more complicated aspects, unfolding in combustible beats and gorgeously sprawling textures. "It's the first song, but the last chapter of the story," Carson explains. "Once broken, she has chosen to pick up the pieces of her heart and find the strength to survive, because come what may, it's only love, nobody dies." Expanding on the empowering spirit of its opening number, Sofia Carson next offers up the unapologetically bold "LOUD." With its stark guitar tones and spellbinding vocal work, the track arrives as an understated but unstoppable anthem of finding your voice and owning your truth. "'LOUD' is the chapter in my story when she chooses to fall back in love with the greatest love of all: herself. And promises that from that moment on, she will forever and always be loud," says Carson. First released in early 2022, "LOUD" has already had a massive impact on audiences across the globe, with countless listeners taking to social media to share their stories of triumphant self-acceptance. "It's been so overwhelmingly beautiful to see how people have made this song their own," Carson says. "However they identify, they're standing up and telling the world that they won't be silenced, that they were made to be loud, which says so much about the beauty of music: by amplifying my own voice, I'm able to amplify and celebrate the voices of others."

One of the most euphoric tracks on Sofia Carson, "Timeless" is a dance-floor-ready bop built on throbbing rhythms and the jangly guitar riffs of classic disco. "It's about that moment when you're struck by the certainty that your love could stand the test of time. I wanted the song to feel like a spectacular celebration of love-not knowing or caring what's happening around you, because you're so completely and beautifully lost in that feeling," she says. From there, the album shifts into the soulful urgency of "Stay," an irresistibly moody meditation on longing and regret. "The process of creating 'Stay' was one of my most emotional writing experiences, because it was so deeply vulnerable," says Carson, who recorded the song at the former studio of Frank Sinatra with the iconic Rami Yacoub and Johann Carrlson from MXM. "I poured my heart into every melody, and left my soul in every word. I wanted my vocal to truly capture what it feels like to be broken by love." And on "Como, Cuando Y Donde," Carson presents a breathtaking piano ballad delivered in Spanish, overflowing with an undeniably raw emotion that defies all language barriers. "This song is about the endless nights when you're mind races with thoughts of when you lost him, why things went wrong, and where he could be. And most of all, the resounding truth in your heart that you are willing to go wherever whenever, to be with him again." "Because this album is a reflection of who I am, I knew I needed a song in Spanish-I was raised bi-culturally and grew up singing and writing music in both Spanish and English. This song was the perfect choice; it's beautifully tender, yet passionately heartbreaking."

All throughout her debut album, Carson uses the whirlwind of romantic love as a lens for examining everything from self-worth to liberation to the power of trusting your intuition. Listing pop storytellers like Taylor Swift and writers like Isabel Allende and Paulo Coelho among her most enduring inspirations, she grew up on an eclectic mix of artists (Elvis Presley, Alicia Keys, Basque singing group Mocedades) and started crafting songs of her own at the age of ten. "My first song was in English and Spanish and was called 'Leave Me Alone,' or 'Déjame en Paz,'" she remembers. "I was always drawn toward writing about love, and always drawn to the dramatic." At age 16 Carson began traveling to L.A. for songwriting sessions, each time with her treasured songbook in hand. "I'd hand-write all my songs in that book, and I still have it with me now," she says. "It's a reminder of a little girl who was fearless and always true to who she was."

With over a billion streams to date, Carson has since carved out her own distinct path in music, film, TV, and philanthropy. Along with scoring a #1 hit on the Billboard 200 with the gold-certified soundtrack to Descendants, she saw her 2019 hit single "I Luv U" hit #1 on Spotify's highly coveted playlist New Music Friday. Known for her starring roles in Netflix's Feel The Beat, Michael Bay's Songbird, and Pretty Little Liars: The Perfectionists, she's earned a number of award nominations (including the Teen Choice Awards' Best Drama Actress and Next Big Thing and Radio Disney Music Awards' Best Song), performed at such high-profile events as the 2020 Macy's Thanksgiving Day Parade, and launched her own makeup collection via Revlon (who named her a global brand ambassador). Also a devoted philanthropist, Carson is a U.S. Ambassador for UNICEF, the first global ambassador of the Latin GRAMMY Cultural Foundation, a member of the first-ever Ambassadors Council for The Music Forward Foundation, and an honorary board member of WE DO IT TOGETHER (a nonprofit production company dedicated to the empowerment of women).

Now set to star in, executive-produce, and co-write/perform the soundtrack to Netflix's upcoming film Purple Hearts, Carson brought her boundless vision to the visual component of her full-length debut. "When we were creating the visual story for the album, I came up with the idea of focusing on the five elements-they're the essence of life, just like my stories are the essence of who I am," she says. In the video for "Fool's Good," for instance, Carson metaphorically plays with fire, while the visual for "He Loves Me, But..." conjures the element of earth in its majestic desert landscape.

In looking back on the making of her debut album, Carson is quick to note the immense joy she discovered in fully immersing herself in the creative process. "It was incredibly freeing to dive into the depths of my heart, to take all the stories and secrets that had been hiding there, and make them into beautiful music," she says. "This album taught me that there's so much beauty in vulnerability." And as she worked to overcome that fear, Carson found infinite strength in the heartfelt intention she brings to all of her output. "With every song I write and every role I play, I keep in mind that there's at least one girl in one corner of the world who'll be impacted by my voice and my art," she says. "I consider that a beautiful responsibility and an absolute privilege, so I carry them with me in everything I do." 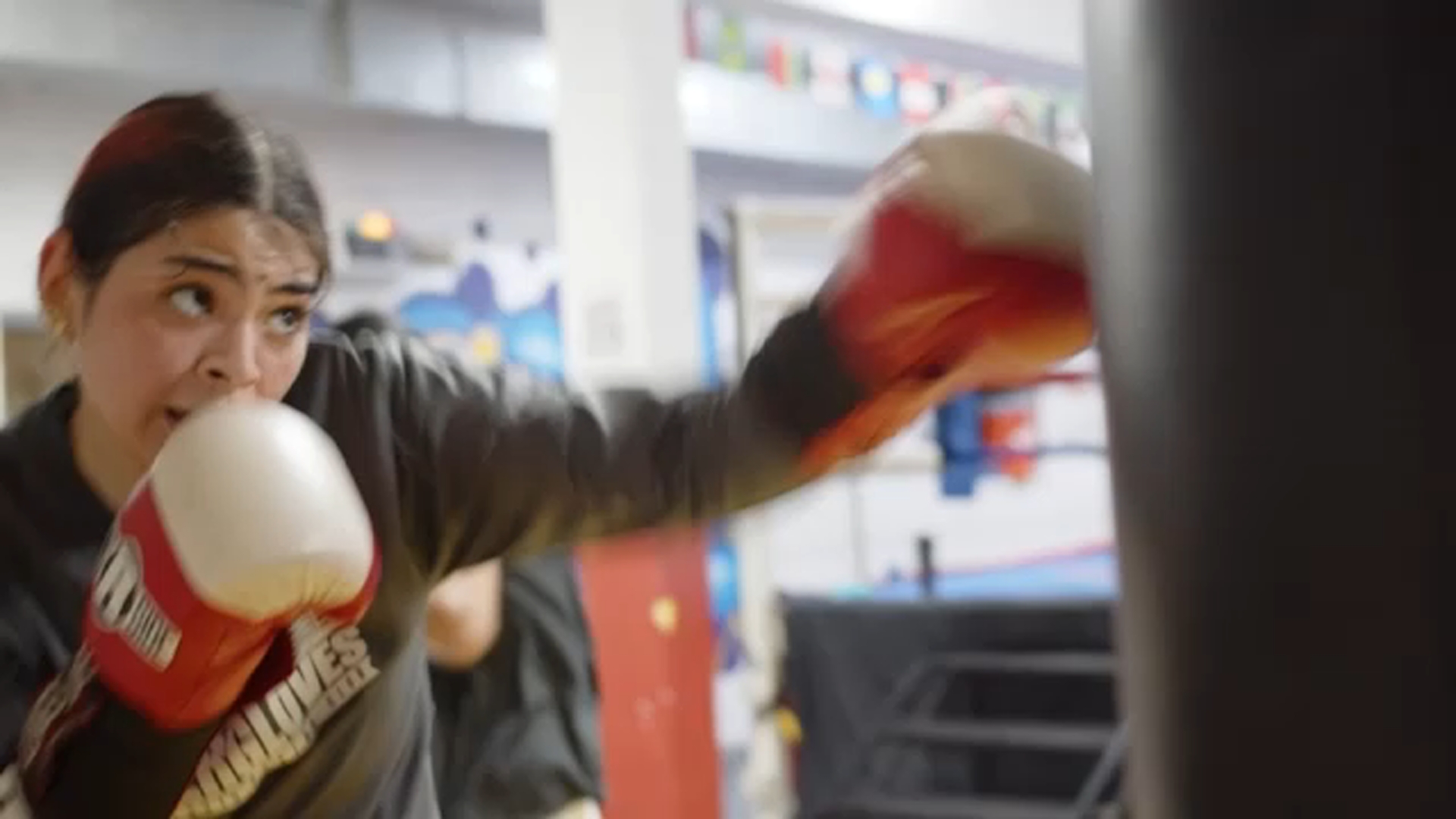