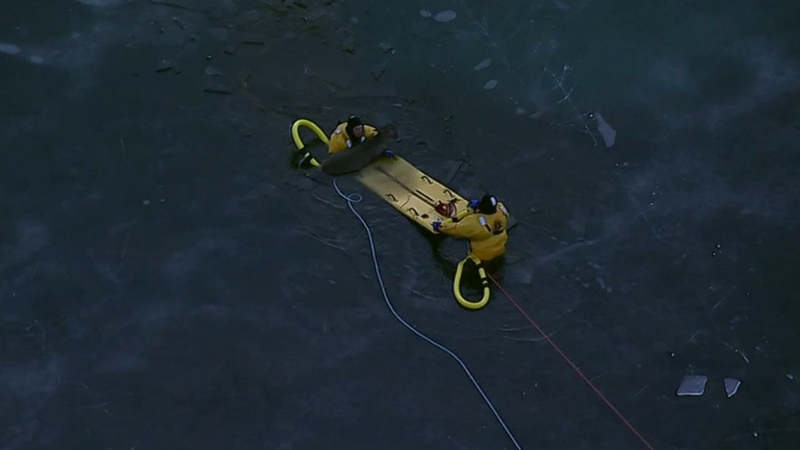 SOUTH AMBOY, N.J. -- A dramatic rescue played out on a partially-frozen pond in New Jersey Friday evening, and NewsCopter7 was overhead to capture every hoof-dropping moment.

Members of the Sayreville ice rescue team, as well as the local fire and police departments and Animal Control, came to the aid of a deer that had fallen through the ice in Waterworks Park in South Amboy, near South Broadway and O'Leary Boulevard.

"This is a really difficult type of rescue. It's not a dog that is used to being around humans. This is a deer; it doesn't necessarily want the help from the humans," said Shannon Sohn, from Newscopter 7.

It was 30 minutes of pure drama, playing out live from NewsCopter7.

A deer, fell through the partially-frozen pond.

Mierzwiak was one of the three firefighters in the icy water.

The 21-year-old has been a firefighter for three years.

Sayreville's Fire Department has only been training for ice rescues for two years.

This was the first time they dove into action.

They never thought their first victim would be a deer.

They've never even trained for an animal rescue.

"The initial idea was to get the deer onto the water and extract it fast as possible, but it was a lot harder because you can't talk to the deer," Mierzwiak said.

"He actually took the time, calmed it down, and was able to get it on a sled and get it out. So he actually worked very hard and was patient with it," said Chief Vincent Waranowicz, Sayreville Fire Department.

It was some local animal control officers who first spotted the deer with only his head bobbing above water.

They say he's about 18 months old, and was in the icy water for at least 90 minutes.

After pulling him out, they threw a blanket on him, warmed him up, and 30 minutes later, they released him back into the woods.