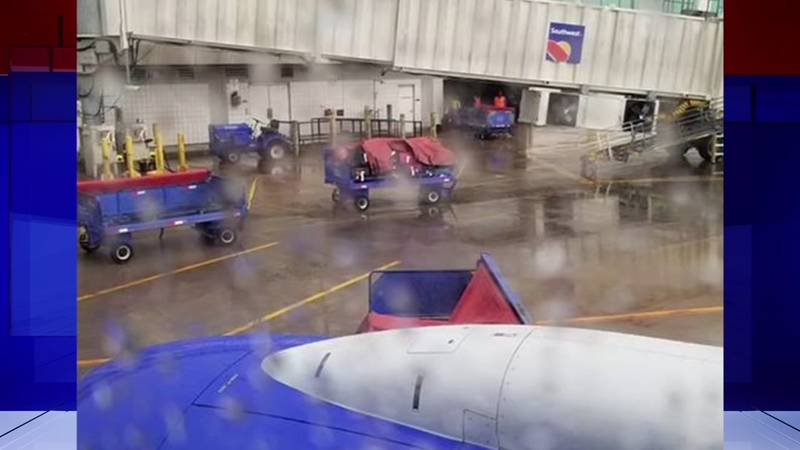 HOUSTON, Texas -- A traveler on a Southwest Airlines flight out of Hobby Airport in Houston said he watched helplessly as his bags were left out in the open, being soaked by rain.

"I just feel like it's unfair if your bags are left out in the rain, that you're responsible for it," he said. "I saw the guy pull the cover back off my bags and I saw my bag getting rained on. It went on and on and on."

Jared says the worker removed the tarp from his bags, letting them get soaked in the rain as he watched helplessly inside the delayed plane.

The flight finally left and when he made it to his destination, he hoped his bags were able to keep the water out.

"(I) got back to the hotel. There was water in my bags. One of my bags is a tool bag and it had an actual puddle in it," he said.

Jared told the airline about the problems, including ruined clothes and tools.
"They said they are not responsible for my bags getting wet," he said.

Southwest Airlines sent him an email saying they are not liable. They sent a similar statement to ABC13 saying:

"Our Customer Relations team has followed up with the Customer regarding their concerns. Our records indicate we followed our Contract of Carriage.

We always regret when a Customer has a less than positive experience on Southwest Airlines and we hope to make it to them on a future flight (sic)."

The airline also mentioned lightning in the area in the note to Jared, saying that forced workers inside.
"I'm sure there was a lightning storm, but they pulled the cover off my bags before they even got anywhere near it," Jared said.

Jared had almost given up, until ABC13 reached out to the airline. Jared says after that, he got another phone call.