Answering the big questions on the Blackhawks' firing of Quenneville 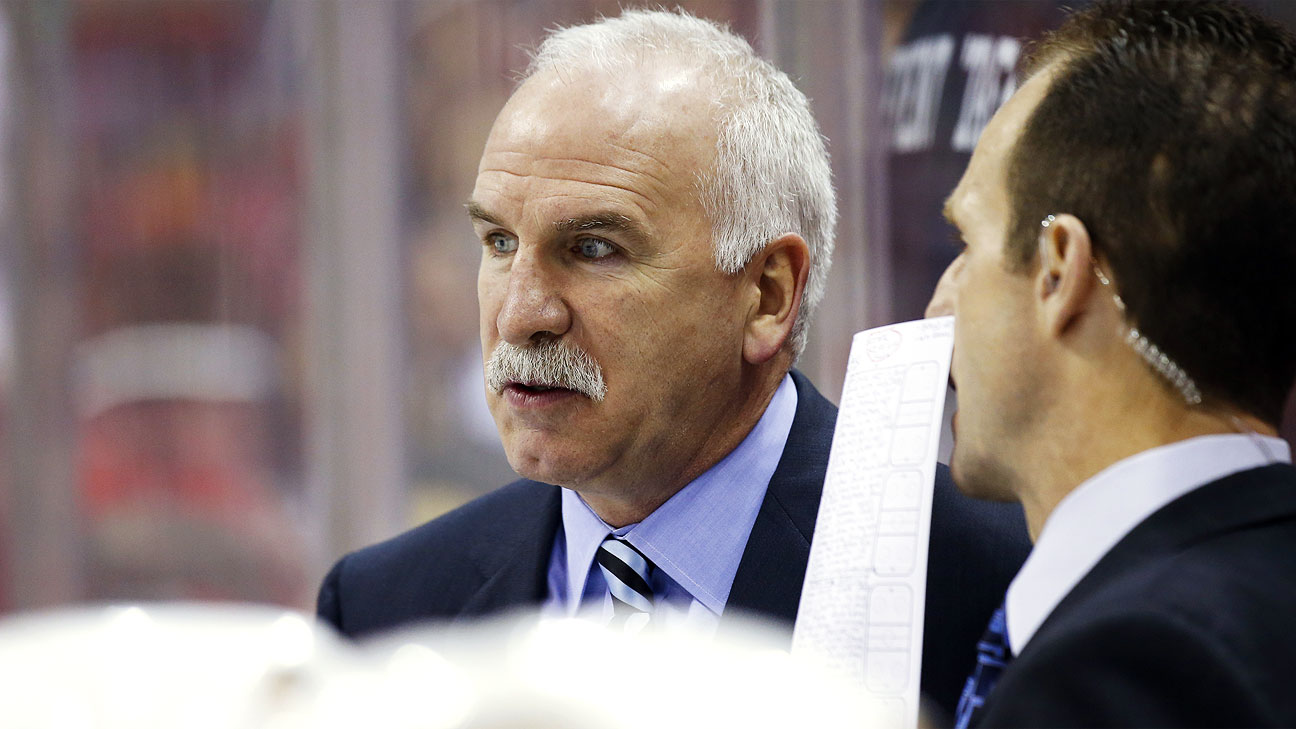 Every NHL coach expects to be fired one day. Yet there's still something jarring about the Chicago Blackhawks firing coach Joel Quenneville after 797 games as head coach, having posted a .627 winning percentage. The Blackhawks won three Stanley Cups under Quenneville in six seasons, from 2009-2015. They had won three Cups in their previous 82 seasons before that.

What's next for all involved? A look at the future for the Blackhawks and Quenneville.

After a brief resurgence earlier this season, the Blackhawks have dropped down the standings. Their past two weeks have been particularly brutal: an 0-4-1 run against the Oilers, Canucks, Flames and the Blues, who routed them 7-3. They have a 6-6-3 record overall and a minus-10 goal differential. The Blackhawks have 15 points through the first 15 games of the season, their fewest at this point since 2010-11.

The Blackhawks have also been disastrous on special teams, with a terrible power play (27th) and a below average penalty kill (22nd), which is why assistant coaches Kevin Dineen and Ulf Samuelsson are out the door with him.

That performance is only part of the "why." The clashes between Quenneville and Blackhawks management, in particular general manager Stan Bowman, have been many. It's a relationship that could find tenuous peace in the good times, but a run of failure for the franchise -- two first-round exits followed by a 76-point season outside the playoffs in 2017-18 -- has broken that peace. Bowman outlasted his coach.

Whether or not this season is salvageable, there's another reason why Quenneville was fired, and it's the reason most decisions are made in the NHL: money. He's signed for $6 million annually through next season. The chances he gets a new job by the time you read this sentence, and comes off the Blackhawks' books, is rather high. If Chicago is going to be a bad team again, it might as well be one with Jeremy Colliton's salary behind the bench.

When it comes to coaching experience, Colliton isn't exactly Joel Quenneville. From 2014-17, he was head coach for Mora IK of the HockeyAllsvenskan in Sweden after a playing career that spanned from 2005-14. He appeared in 57 games in the NHL, all with the New York Islanders.

He was named head coach of the AHL Rockford Ice Hogs in 2017, and coached the Blackhawks' minor league affiliate until replacing Quenneville. At 33, he's the youngest head coach in the NHL. To put things in perspective, he was drafted by the Islanders in the same year the Blackhawks drafted current defenseman Brent Seabrook.

What does he bring to the team, besides an obvious cost savings? Relatability. Quenneville is 60 years old and one of the most accomplished bench bosses in NHL history. Colliton isn't far removed from being one of the boys. There are 15 players under the age of 30 on the Blackhawks roster, with a youth movement ongoing. Going younger in the hopes of energizing the supporting cast is a time-honored NHL tradition -- look no further than the Boston Bruins and Bruce Cassidy last season.

"To play in the NHL, you can't just go up there and try to survive," Colliton told NHL.com in March. "You can't just try to get rid of the puck. You've got to have some confidence to make some plays, be physical when it's necessary, win a battle when it's necessary. It's just part of their process to be the guy that makes a difference. We're trying to give them a little bit of that edge, a little bit of personality to their game, and hopefully that will serve them well."

Those who know Colliton rave about his hockey acumen and demeanor. Clearly, given his trajectory, the Blackhawks feel they have something special to have named him head coach, rather than interim.

What's next for Joel Quenneville?

Really, anything he'd like. It's rare a coach of this caliber becomes available, one that will have teams that are otherwise comfortable with their coaches asking "what if?" while teams that are contemplating a change are running budget numbers.

Teams that immediately come to mind that might be in the Quenneville business:

There are also two long-term options for him: The Detroit Red Wings, who are rebuilding while coach Jeff Blashill watches the clock tick on his tenure; and, potentially, the Seattle expansion franchise that could begin playing in 2020-21. Perhaps Quenneville could sit by and collect some salary before making things official there and taking on a fun new challenge?

But the most intriguing option: The Edmonton Oilers. Coach Todd McLellan's job was saved -- for now -- by a recent streak up the standings. Quenneville has excelled while coaching dynamic talent in the past, and they don't come more dynamic than Connor McDavid. He also has deep Hockey Canada ties with management in Edmonton, including team CEO Bob Nicholson.

What's next for the Blackhawks?

The timing of this might have seemed sudden, but if the Blackhawks are going to kick-start their season, it had to happen now. Beginning Thanksgiving week, they face a stretch that features some of the league's best: three games against Winnipeg, two against Nashville, and battles against Eastern powers like Tampa Bay, Washington and Pittsburgh during a 15-game run. If they aren't playing better by then, they'll be eaten like a stuffed turkey.

But beyond this season, this is still a problem of construction over coaching. Joel Quenneville didn't inflate the team's payroll to the point where a collection of outstanding players --Niklas Hjalmarsson, Artemi Panarin, Teuvo Teravainen among them -- were jettisoned out of financial considerations. The Blackhawks will remain in salary cap hell next season, with $61.1 million already committed to 14 players, six of whom have no-move protection. That currently leaves just over $18 million for nine other players. Hence, youth movement down the roster.

So the essential questions now for Chicago: Does Jeremy Colliton lead a renaissance back to championship contender status while Jonathan Toews, Patrick Kane and Duncan Keith still have something left? If not, how long before Stan Bowman pays for these diminishing returns with his own job?
Report a correction or typo
Related topics:
sportsespnsports bettingchicago blackhawkshockeysupreme courtnhlvegasnhl betting
Copyright © 2020 ESPN Internet Ventures. All rights reserved.
More Videos
From CNN Newsource affiliates
TOP STORIES