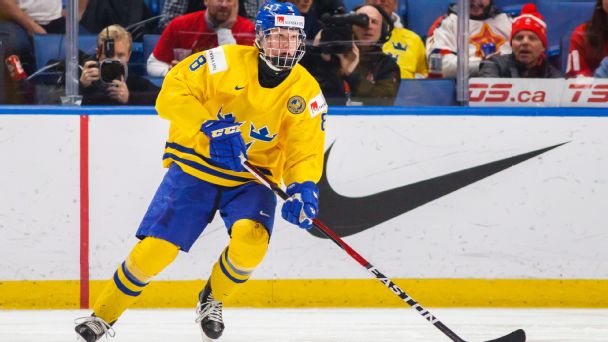 Which team deserves to win the NHL draft lottery and get top prospect Rasmus Dahlin?

Greg Wyshynski, senior writer: As I survey the draft lottery landscape, looking for the team most deserving of a generational talent like defenseman Rasmus Dahlin, I use the processes of elimination to narrow the field.

That leaves us with a few teams, but the ones with the best current odds are theVancouver Canucks and Detroit Red Wings. Of those two, I'd say the Red Wingsare the most deserving, which admittedly will come as a shock to anyone who can locate and tabulate Stanley Cup championship banners.

Simply put: They're both sort of directionless teams, even if the Canucks' top line shows promise, with some good prospects and GMs who have lost the faith of their respective fan bases. What the Red Wings have that Vancouver doesn't: a new arena that is in desperate need of an attraction like Dahlin. And, with due respect toAlexander Edlerand Mattias Ohlund, the Red Wings also have already built a dynasty on the back of the best Swedish defenseman in hockey history. And Nicklas Lidstrom is already a fan of Dahlin, his young countrymate.

So to restore the glory of the Red Wings, and to fill a few seats at the Pizza Chain Arena, I'd say Detroit deserves Dahlin.

Will the Red Wings win the lottery? Of course not. We all know that theChicago Blackhawkswill, with Dahlin telling the assembled media at the draft how excited he is to join the Blackhawks because he loves playing outdoors. And then Gary Bettman winks at the camera. C'mon, you know it's true.

Emily Kaplan: If you're a Sabres fan, it has been a rough year. And so what happened at the trade deadline -- or, more accurately, what didn't transpire -- was not exactly jarring. It was on par with the way things have been going for Buffalo. In a year where first-round picks were being handed out like Halloween candy, the Sabres couldn't muster much for one of the most talented rental wingers on the market, Evander Kane.

"We had one legitimate offer," GM Jason Botterill told reporters, in a statement that was part self-defense, part totally depressing. When Botterill was asked about when he will make major improvements to his team, the GM offered an answer that was equally grim: "I don't have an exact time frame for you. The group that we have is not working."

In the absence of Kane, this is a team with only one potential superstar, Eichel. That's it. There's the glimmer of hope that Casey Mittelstadt, the 19-year-old breakout star of the 2018 World Junior Championships, is on the way, but the mess in Buffalo will require more than just one precocious teenager to fix. Two uber-skilled teenagers in the system? Now we're talking. The current Sabres are not good, nor are they flashing anything to be excited about. Eichel, 21, is one of just four players on the roster under the age of 24. (He's joined by center Sam Reinhart, 22, winger Nicholas Baptiste, 22, and D-man Rasmus Ristolainen, 23).

Coming off 2016-17's 78-point season, the Sabres were supposed to receive a jolt of energy from Botterill, widely respected from his work with thePittsburgh Penguins; rookie head coach Phil Housley, a personable former player; and Eichel, the centerpiece who signed an eight-year, $80-million extension in October. The results have come slower than expected because, frankly, the rest of the Sabres' roster doesn't just need a face-lift, but full-on surgery. The only way to expedite this is by adding another franchise-changing player -- and by all accounts, that's what Rasmus Dahlin is.

Chris Peters: I have to go with Emily on this one. Buffalo has suffered plenty in the past, but this year felt like it finally broke the will of the Sabres fans. While I was in Buffalo covering the World Juniors in December, I talked with locals and the people who cover the team day to day. The deep apathy the franchise has been met with this season was palpable. Getting Eichel was supposed to be a salve for the Sabres, or even a beacon of hope. But the disaster was too big for any one player to solve. It's probably too overwhelming for Eichel and, should Buffalo win the lottery, Dahlin combined. A No. 1 defenseman who can control a game and make plays that defy logic -- as Dahlin does -- would be a massive leap in the right direction, however.

This franchise is already on its third GM since it started the rebuilding process. Buffalo has been a graveyard for coaches, too. Botterill and Housley had to know they were taking on a massive project, but it might be even more daunting than they expected. Getting another key piece in the draft like Dahlin might actually allow those two a chance to get some traction in ways their predecessors didn't.

There have been dark days in places like Arizona, Edmonton, and now Vancouver and Ottawa, but consider this -- since 2013-14, the only NHL team with fewer wins than the Sabres' 132 is the expansion franchise, the first-year Vegas Golden Knights. That's 14 fewer victories than the next-closest team, Arizona. Sabres fans, often accurately lauded as TV ratings champions, deeply loyal and passionate, have had enough and their frustration is warranted. Their rebuild needs another kick-start after the initial Eichel bump. Dahlin could absolutely provide that.
Report a correction or typo
Related topics:
sportsespncup championchicago blackhawkspostseasonnhl draftbuffalo sabresdraft lotterystanley cup playoffsstanley cupdetroit red wingsrasmus dahlintop prospectsnhlplayoffs
Copyright © 2020 ESPN Internet Ventures. All rights reserved.
More Videos
From CNN Newsource affiliates
TOP STORIES