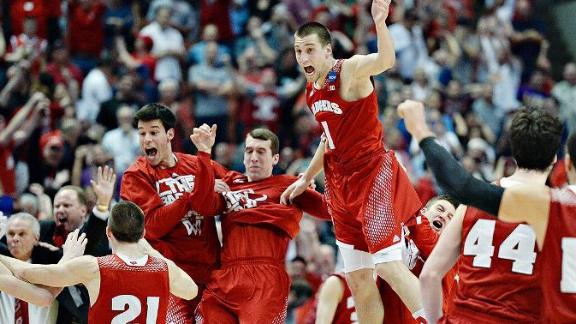 The Big Ten will make the most money of any conference from this year's men's NCAA tournament.

With six of its teams playing in a total of 16 games, the Big Ten will get about $25.6 million from the NCAA during a six-year period.

Conferences receive a unit for each game their teams play in the tournament except the final. Those units are then paid out in each of the next six years, with the value of those units increasing by approximately $5,000 per year.

Wisconsin has earned the maximum five units for making the Final Four, while Michigan and Michigan State got four each for getting to the Elite Eight. Iowa, Nebraska and Ohio State earned one unit each as they bowed out in their opening games.

What's impressive about the SEC's showing is that only three of its schools made the tournament, with Tennessee reaching the Sweet 16 and Kentucky and Florida making it to the Final Four. A lackluster showing by the ACC, which saw none of its teams make it past the Sweet 16, and a surprising run by UConn, gave the ACC and American Athletic Conference 11 shares each that will be worth about $17.6 million in the next six years.

The payouts mostly come from the NCAA's 14-year, $10.8 billion television deal with CBS and Turner. The NCAA will distribute $193.5 million this year from its basketball fund based on games played by conferences from 2008 to 2013.

The Big Ten earned $20.4 million last year. Most conferences, including the Big Ten, split the money they receive from the basketball fund equally among their member schools.