Blackhawks, Blues and Sabres must fix their pathetic power plays -- or not converting will cost them 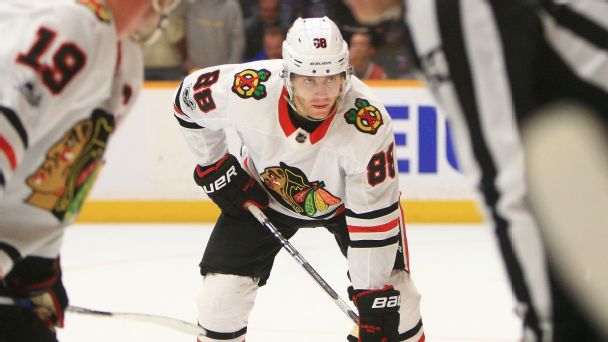 The Columbus Blue Jacketsare on pace to have the most pathetic power play of all time. Which other team most needs to improve with the man advantage?

Greg Wyshynski: It's not all that difficult to diagnose the problems with the Chicago Blackhawks' pathetic power play, which sits at a putrid 14.17 percent on the season, 28th-worst in the league.

But they can -- and should -- be better than this. Brandon Saad with one power-play point in 33 games? Pathetic. Kane, with two power-play goals so far after getting nine last season? Unacceptable. At least Artem Anisimov is holding up his end of the deal, with seven goals this season.

The Hawks are second in the NHL in power-play opportunities, with 134. They're not first in the NHL in squandering them. It just feels that way.

Emily Kaplan: The St. Louis Blues are a very good team. They spread the puck out nicely. They average three goals per game (12th best in the NHL), 33.6 shots per game (eighth) and have a 51.7 Corsi for percentage at even strength (10th). But another ugly stat is weighing them down: the power play is anything but effective.

Oh, St. Louis is drawing penalties. The Blues' 127 power-play opportunities are the fourth-most in the league. The problem is they're only converting on 16.5 percent of those opportunities, which is the 25th-worst mark in the league. It's been especially bleak lately, as the Blues have not scored a power-play goal in five of their past six games; it doesn't help that St. Louis is now without its man-advantage leader,Jaden Schwartz (four power-play goals), for extended time.

Nevertheless, this futility is unexpected on a team with one of the league's best snipers in Vladimir Tarasenko, one of the NHL's best offensive defenseman in Alex Pietrangeloand generally solid depth all around.This is a carry-over issue from last season. Remember how anemic this power play looked in the playoffs against theMinnesota Wild and Nashville Predators?The Blues went a combined 2-for-30 on the man advantage in those series. By the middle of that Nashville series, Blues coach Mike Yeo was shuffling around everything just trying to get something to work. I suggest Yeo try that now -- according to local reporters, he's been switching things up during practice again. The Blues are still in first place in the Central Division thanks to a scorching start, but the comfy lead is gone. The Predators (and others) are lurking, and getting the power play right is a good way to keep on track.

Chris Peters: It might be too late to do them any good now, but it's hard to imagine the Buffalo Sabres' power play being much worse at this point. While the Blue Jackets are taking some of the heat off, the anemic power play is actually one of the biggest head-scratchers of this dreary Sabres season. Seriously, what happened? Last season, Buffalo had the No. 1 power play in the NHL, scoring on 24.5 percent of its advantages. This year, however, the Sabres are 30th in the league, scoring on just 12.7 of their power plays this year. Well, it gets worse.

The Sabres have scored a measly 13 power-play goals this year, but they've also allowed eight shorthanded goals. A plus-5 goal differential on the power play might be a worse statistic than the raw total of power-play goals for Buffalo at this point. There are a lot of things wrong with the Sabres this year, and this power play is right up there. Even given the coaching change -- Phil Housley replaced Dan Bylsma in April -- it's hard to believe any team could fall so dramatically from one season to the next, especially since the Sabres have basically all of their top power-play producers from last season on the roster right now (save for last year's power-play goals leader,Matt Moulson, who was shipped to the AHL).

You'd expect Housley, who scored half of his 1,232 career points on the power play, to be able to find a fix. That said, the head coach isn't always going to be the day-to-day supervisor of special teams, and even the players have said the systems are not that much different from what worked last year. This very well could be a situation where it's all just snowballing on the Sabres, and this year, the rolling snow boulder took the power play with it. They're going to need to work on their shortcomings piece by piece to get things headed in a positive direction. Seeing as how the power play is one thing that went well for them last season, maybe it can eventually become an area that sparks them. Any spark will do at this point.
Report a correction or typo
Related topics:
sportsespnchicago blackhawkspostseasoncorsi forst louis bluesbuffalo sabresman advantagestanley cup playoffsnhlpower playbrent seabrookbrandon saadartem anisimovpatrick kane
Copyright © 2020 ESPN Internet Ventures. All rights reserved.
More Videos
From CNN Newsource affiliates
TOP STORIES