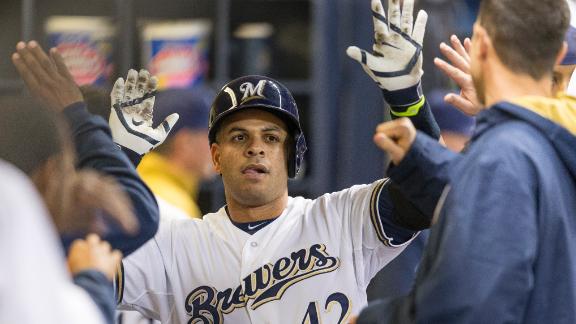 PEORIA, Ariz. -- A clubhouse outbreak of pinkeye is forcing the Milwaukee Brewers to find a new way to celebrate top plays at spring training.

As in, no high-fiving hand slaps until the condition is under control.

Catcher Jonathan Lucroy and pitching coach Rick Kranitz were the latest victims of pinkeye. They stayed home in hopes of stopping the spread of the annoying and highly contagious malady that causes itchy eyes, among other symptoms.

"We've been going through it for a while, and it seems like a couple more show up every day," manager Ron Roenicke said.

"Trying to stay away from it. We can't have it go through the whole clubhouse," he said.

For now, Milwaukee players are supposed to avoid high-fives and instead tap elbows or bump batting glove-covered fists.

Infielder Yadiel Rivera returned to action from pinkeye Friday and played in a 10-5 loss to Seattle. Juan Centeno, who started at catcher, returned Thursday and homered Friday.

"I'm hoping we put an end to this thing. Now we've got this darn chest thing going around that I've got," Roenicke said before the game.

Pitcher Wily Peralta was sent home because he felt ill, as well.

Lucroy is expected to return for Saturday's game and possibly catch.

"Luke, getting him back on the field and having him healthy going into the season, that's pretty important," Roenicke said. "The other little things, they're one or two days here and there. Everybody's going to have those."

Reliever Mike Fiers was trying to avoid the pinkeye problem.

"I just don't want to catch it," he said. "Just try to be sanitary. Wash your hands after everything you do, be careful and don't put your hands in your eyes or your mouth. Just try to stay as clean as possible."