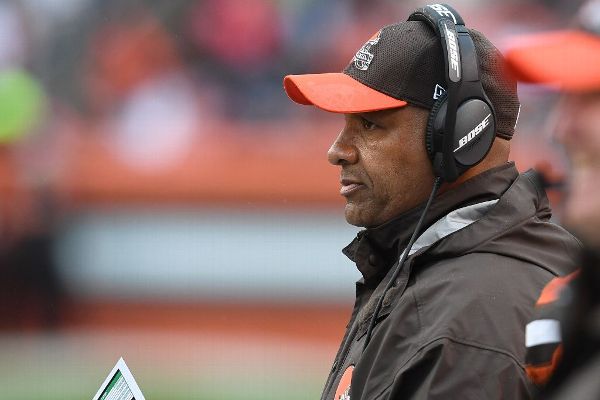 CLEVELAND -- Hue Jackson tapped his right hand on the side of the podium as he tried to find a way to describe being 0-12 in his first season as the Cleveland Browns' coach. As he spoke, his eyes started to well up and his voice broke ever so slightly.

Jackson quickly composed himself, but this was the first real sign of emotion that the coach has shown in a long season. The more he spoke, the more it was evident that every loss is taking a piece out of him.

"It's been a long 12 weeks," Jackson said. Sunday's news conference started about 20 to 30 minutes late.

Jackson said he simply had a regular postgame assessment with management that went long, and he said he is not worried about his job.

"I'm going to be here," he said. But he also said he's going through something he's never experienced.

"I don't like losing," Jackson said. "I never have and never will. I've had my butt kicked up enough over my shoulders enough this season that I really don't need my butt kicked anymore."

The Browns are every bit of their record. Opponents have not scored fewer than 24 points in a game. The Browns have started three quarterbacks and had seven different players throw a pass. The past four games, the offense has scored 10, 7, 9 and 13 points.

Jackson would not second-guess his decision to gut the roster -- he called it a "reboot" --and load it with rookies. When Sunday's game started, 18 of the team's 53 players were rookies.

"I'm not going to get into all that," Jackson said. "None of that matters right now. We have the team we have, and I'm just going to keep coaching the heck out of them."

As he has done all season, Jackson said the responsibility and blame is his. But he also said that given the roster and the events of the season, everything has to go perfectly for the Browns to win.

"And it's not going to be perfect," he said.

The players stand behind Jackson, saying he has maintained the same attitude with them all season.

"It is hard on everybody," quarterback Josh McCown said. "It is really frustrating because you see the effort put in every week and the way that everybody (is working) and the way that coach Jackson is leading the team and the energy that he brings, no matter what our record says."

"I think it's tough to be in the situation we're in because everybody wants an answer," he said. "It's this, it's that, it's exactly this. Well, I'm not going to give you an answer. What it is, is coach Jackson." When the season started, Jackson said the Browns would win "by hook or by crook."

It hasn't happened, but Jackson said he believes his players have not quit, and he believes this struggle will not last.

"I told our players, and I mean this and I'm going to tell all of you: This will be the last time, this year, that we ever feel the way we feel," he said. "I know that in my heart. I know that without question."

Battered and emotional as he is, Jackson still has not lost all of his bravado.

"You're going to get us, you better get us now," he said. "And I'm not feeling like this next year. There is no way."

Jackson calls being 0-12 the hardest thing ever
Browns coach Hue Jackson says that the team will keep battling despite starting the season 0-12 and that the fans deserve better.