Bulls' Kris Dunn to play vs. Raptors after missing last 11 games while recovering from a concussion 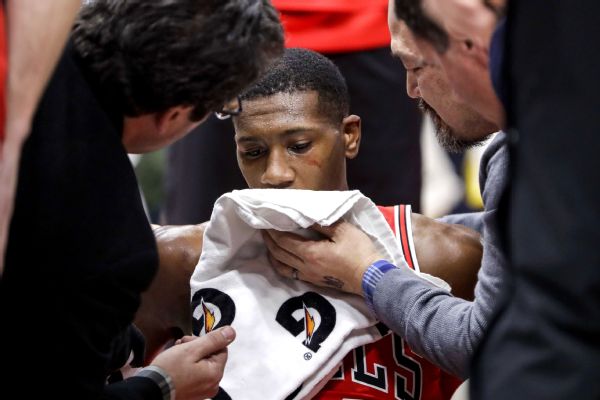 CHICAGO -- Bulls point guard Kris Dunn will play Wednesday against the Toronto Raptors after missing the past 11 games because of concussion-like symptoms.

"I'm going to go out there and play a couple minutes," Dunn said after Wednesday's practice. "See how my body's feeling."

Dunn suffered a concussion and cracked teeth after landing on his face after finishing a dunk in a Jan. 17 loss to the Golden State Warriors. Bulls head coach Fred Hoiberg noted that Dunn would start Wednesday's game but would only play about 20 minutes and likely wouldn't play in the fourth quarter.

"The plan for Kris tonight is pretty similar to what we did with Zach [LaVine] when he first got back in the lineup," Hoiberg said. "Obviously with Kris Dunn we're not dealing with a soft tissue injury like we were with Zach, so it will be a little bit different in that regard. I imagine he'll get pretty winded, especially when he's out there early in the game. We will start him tonight, then we just need to monitor him, see how he's doing."

As long as Dunn comes out of Wednesday's game feeling good, he is expected to play in Friday night's Rising Stars Challenge at All-Star Weekend in Los Angeles. Hoiberg acknowledged that Dunn will also have a minutes restriction in the exhibition game.

"He can't go out there in that game and play 30-plus minutes. But at the same time, I'm excited for him, I'm excited for Lauri [Markkanen] to go out and experience that weekend. It's hopefully something that they can go out and enjoy themselves. Have some fun, decompress a little bit. But Kris, I'm [going to tell him] if somebody's on a breakaway, let's not sprint back. Let's just stay at half court and try to get a dunk in."

Hoiberg says Dunn has worked through the soreness phase of practicing, having gone through a few workouts with the Bulls' G-League affiliate. The third-year coach is also looking forward to seeing Dunn, LaVine and rookie Lauri Markkanen on the floor together. The trio has only played three games together this season.

For his part, Dunn is excited about having the chance to take his family out to Los Angeles for the All-Star festivities.

"[My sister] wants to see all the celebrities," Dunn said. "Lil Uzi, Kanye West, the Kardashians, all the stuff you see on the TV. So hopefully they get to see them. I told her, 'If you see them, go get that picture somehow. Now, if anybody puts their hands on you, I got you.'"
Report a correction or typo
Related topics:
sportsespnchicago bullskris dunnnba
Copyright © 2020 ESPN Internet Ventures. All rights reserved.
More Videos
From CNN Newsource affiliates
TOP STORIES