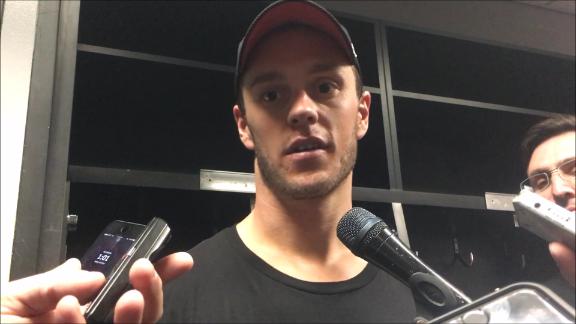 ESPN
By Tal Pinchevsky
The Western Conference featured so many compelling storylines this season -- fromConnor McDavid's dominance with the Edmonton OilerstoP.K. Subbanbringing pizazz to theNashville Predatorsto the Minnesota Wild's rejuvenation under new coach Bruce Boudreau -- that it was easy to forget that any playoff talk involving the West still ultimately starts and ends with the Chicago Blackhawks.

Chicago once again looks like the class of the conference and enters the playoffs as its top seed. The Blackhawks will face the Predators -- a familiar postseason foe whom they beat in both 2010 and 2015 -- in the first round, beginning with Game 1 on Thursday in Chicago. And no one knows better how the West can be won than Blackhawks captain Jonathan Toews.

The 28-year-old center has won at every level -- from a national prep title in 2005 at Shattuck-St. Mary's to multiple junior and Olympic gold medals for Team Canada to a World Cup of Hockey championship last fall.

He has also won three Stanley Cups with Chicago, as well the Conn Smythe Trophy as playoff MVP in 2010, when Toews became the second-youngest player in NHL history to captain a title team, behind onlySidney Crosby.

"There are certain types of players who just love the big stage and love competing," said Claude Lemieux, a four-time Cup winner known for doing anything in his power to swing a playoff game. "The bigger the stage, the more they compete. That's just how he is."

Keeping his composure in the spotlight has been a hallmark for Toews, whom Chicago selected with the third overall pick in 2006. He joined the Blackhawks in 2007 and was named captain the following season.

"When it gets crazy, when you're down a goal in a road building, you've just got to find ways to stay calm and stick to the process and execute the best you can," Toews said. "I think that's when your experience really takes over. And guys probably respond to that more than anything."

But Toews didn't look like his old self during the first half of this season. He missed nine games in late November and early Decemberwith a back injury and endured a prolonged slump.

In fact, after he was still named to the All-Star Game -- and the NHL's 100 greatest players list -- in January, Toews seemed almost apologetic that he had been selected in place of teammatesArtem Anisimov, Artemi Panarin andMarian Hossa. All three had more points entering the breakthan did Toews, whose seven goals and 13 assists at the season's midpoint were well behind his typical pace.

"Why I got picked ahead of those guys based on performance this year, I'm not sure," Toews said at the time.

A few days later, Toews broke out for four points in a 4-2 win over theVancouver Canucks. Despite having rookies Ryan Hartman and Nick Schmaltz and the unproven Richard Panik rotating through his line, Toews shined in the second half.

Leading the team in points has never been Toews' primary focus. For all he's accomplished, the center has never really been acknowledged as a scorer. His longtime teammate, Patrick Kane, is by every measure the more dynamic playmaker. So it's a testament to Toews' varied skill set that his most impressive playoff performances might have come in 2013, when he scored just three goals in 23 playoff games -- but made his presence felt in other ways.

"He didn't have a big playoffs numbers-wise, but was a great leader," Lemieux said. "He was physical, he was being used against the other team's top players. Toews didn't have the numbers compared to Kane, but he played a big role."

While battling an upper-body injury that kept him out of the third period of Game 5 of the 2013 Stanley Cup finals against the Boston Bruins, Toews returned to score the tying goal early in the second period of Game 6. With 76 seconds remaining in regulation, he set up teammate Bryan Bickell's equalizer. Dave Bolland scored 17 seconds later -- and Toews & Co. hoisted the Cup for the second time.

"It seems like the bigger the stage, the bigger the game, the bigger the moment, they're at their best," Chicago coach Joel Quenneville said of his veteran core, anchored by Toews. "They make guys around them better when they lead by example. I think the guys feed off of that as well."

Toews' leadership has been one of the constants for a franchise that -- because of salary-cap constraints -- has been forced to trade away key contributorsDustin Byfuglien, Andrew Ladd, Troy Brouwer, Patrick Sharp, Brandon Saad, Andrew Shaw, Nick Leddy, Teuvo Teravainen, Michael Frolik, Antti Niemi, Kris VersteegandBolland after each championship.

The captain's job this season, as it has been so many times before, was to help groom the latest group of neophytes -- including Hartman, Schmaltz andTanner Kero--into playoff-ready gladiators.

"It's always fun to have those guys come in, really try to contribute and in some ways overachieve any way that they can," Toews said. "Obviously, our experience is huge. But, even at the start of this season, that youthful enthusiasm is something we're looking for, something we'll definitely expect."

The fact that Toews was able to both turn his own season around -- and round the youngsters into form -- is one more reason he is still lauded by many as the best leader in hockey.

"If there were no letters on the jerseys, watching the Hawks play you'd pick it up pretty quick that this guy is the captain of this team," former defenseman Larry Murphy-- who won four Stanley Cups with the Pittsburgh Penguins and Detroit Red Wings while playing alongside two of the greatest captains in hockey history, in Mario Lemieux and Steve Yzerman -- said of Toews. "He's always well prepared and extremely effective on both ends. He definitely leads by example."

So for all the talk of how wide open the West might be, the Blackhawks and their rejuvenated captain still stand in the path of any would-be contenders.

"I think that energy, that ambition and motivation is back," Toews said. "We have that feeling again, that every single moment and every single game matters. It's a lot of fun to play at this time of the year. It's why we work all year to get to this point, and as we have said in the past, the real season begins. Obviously, we want to see what we are made of, and I think we are all pretty confident what we are able to do."

7 hospitalized, including 5-year-old boy after South Side fire: CFD