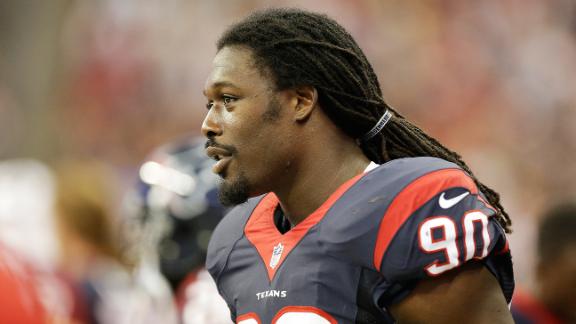 "The explosive stuff they can do, it was impressive," Correa said. "That makes me wonder about my tackles. There's some real tackles out there. J.J. [Watt]had a nice tackle out there. I thought, 'Wow. I better quit tackling people.'"

Correa's own tackling recently got him called into Astros manager A.J. Hinch's office.

On Sunday, after teammate Jose Altuve hit a walk-off single, Correa tackled the diminutive second baseman during the celebration. Hinch asked that Correa, a rookie of the year candidate, not do it again.

Hitting people isn't really Correa's thing, anyway. He's said in the past that he plays baseball because he'd rather be hit by a baseball than by someone like Watt.

Texans outside linebacker Jadeveon Clowney shared the opposite thought with Correa after practice Tuesday. As a kid, Clowney got hit by a baseball. He wanted to hit the guy who threw it, but wasn't allowed.

Correa joked this week that he wanted a tryout with the Texans after his tackle of Altuve. What position would he play?

"I think quarterback," Correa said. "I'm tall. I'm not that heavy, I'm not that big. So I gotta play quarterback. Got a good arm, just gotta learn how to throw the ball."