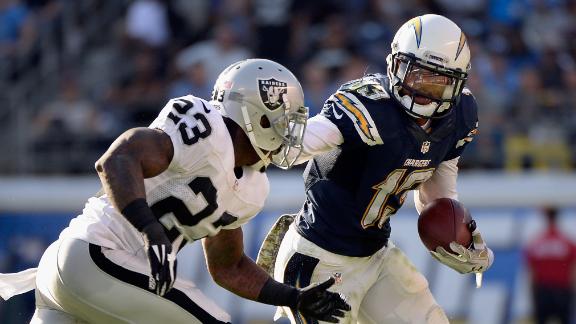 CARSON, Calif. -- A day after the San Diego Chargers and Oakland Raiders announced a proposal to build a privately financed, $1.7 billion stadium in Carson that the two teams would share if they relocate to the Los Angeles market, Carson politicians and community leaders gathered to support the plan.

"This opportunity for the people of Carson is an enormous opportunity," Carson Mayor Jim Dear said. "It will change Carson for the better in a very dramatic way, and it will change our city forever. We are a great community that has great potential to be a model city for America, and these two NFL football team are joining together to help make that happen in Carson."

Carson councilman Albert Robles wore a jersey that was split down the middle between the Raiders and Chargers and said, "We're going to bring football back to Southern California, where we need it, where we want it."

Absent from the nearly one-hour news conference-turned community rally was an official comment from the Chargers or Raiders. Mark Fabiani, the Chargers' special counsel and longtime point person on stadium issues, watched the news conference behind spectators but left immediately after it was over without speaking to reporters. There was no on-site representation from the Raiders.

"We talked about it a lot and we said if we were there, all of the attention would go to what we had to say, which really wasn't going to be different from what we said last night," Fabiani told ESPN.com by telephone after the news conference. "So rather than suck up attention for stuff that wasn't really new, we wanted to give the attention to the community groups, the labor unions, the business leaders and the elected officials. We wanted to be there to meet everybody and thank everybody but we did not want to dominate the press coverage. We wanted the community people have their say and that was a deliberate plan."

Although the Chargers and Raiders are partnering together on this project and have purchased the land for the stadium, a source involved in the negotiations said both teams have agreed to proceed cautiously when it comes to events like the one Friday, which was essentially a rally for the project, as they try to find stadium solutions in their home markets.

The lone connection to the teams who spoke at the event was Tim Romer of Goldman Sachs in Los Angeles, who said he has been working with the Chargers for many years as an adviser on stadium financing.

"Most of the [Chargers'] work has been finding a solution in San Diego," Romer said. "Recently, when we began to evaluate the financing opportunity and options here for this stadium in Carson, we became very interested in the site's potential opportunities. The site is very centrally located to all of Southern California. It's got great freeway access and great local road access, and the site is large enough to accommodate what could be one of the best NFL experiences for fans."

"The financing, which we provide, will rely solely upon the revenues generated from the stadium from football and other events. We're excited about this opportunity. We think it's transformative, and we're excited to continue to work with our clients and both teams to get the financing done for the stadium."

Although the Chargers and Raiders publicly say they are continuing to try to find stadium solutions in their home markets, they have also teamed up to obtain control of the stadium site in Carson and are backing the legal and financing push of the stadium as well as the stadium design, which was unveiled Friday. Both teams will also be providing support for the ballot measure effort for the stadium in Carson.

Both teams have kept the NFL committee handling the possible relocation of teams to Los Angeles informed of their efforts.

In a joint statement released Thursday, the Chargers and Raiders said that they have been working for many years in their home markets to find stadium solutions and that they remain committed throughout 2015 to try to seek publicly acceptable solutions to the stadium issues in their current cities.

However, according to the statement, the two teams also will continue to work in Carson to preserve their options in the event that efforts in their local markets fail.

"We are pursuing this stadium option in Carson for one straightforward reason: If we cannot find a permanent solution in our home markets, we have no alternative but to preserve other options to guarantee the future economic viability of our franchises," the teams said in the joint statement.