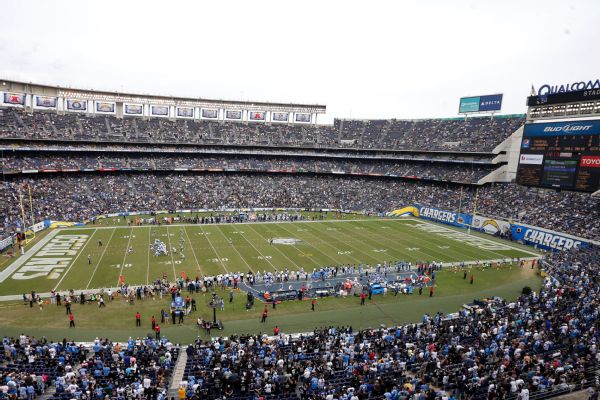 During the NFL owners meetings in January, in which the league approved the relocation of the Rams to Los Angeles, the Chargers were granted the option to relocate to L.A. with a deadline of Jan. 15, 2017.

Chargers chairman Dean Spanos has to alert the league that he intends to exercise that option by next month's deadline.

The Chargers received only 43 percent approval on Measure C in November. The team's $1.8 billion plan proposed raising hotel taxes from 12.5 percent to 16.5 percent to secure $1.15 billion in bonds to help pay for the stadium project.

The citizens' ballot initiative required two-thirds of the voting public within city limits to approve the project, an extremely high bar for the team to reach.

"Dean has said that he wants everyone to be able to focus on the remainder of the Chargers' season, and so [he] won't be making any final decisions until after the season is over," said Mark Fabiani, the point person on the stadium situation for the Chargers. "That hasn't changed."

The Chargers have a tenant-lease agreement with Rams owner Stan Kroenke that lowers the team's risk because they do not have to borrow money for construction of the $2.6 billion project.

The Rams and Chargers would jointly share revenue such as naming rights, suites, sponsors and advertising. The teams would be on their own to sell season tickets and personal seat licenses.

Kroenke has motivation to complete a deal with the Chargers, because he cannot begin selling personal seat licenses until reaching a decision on whether the Chargers or Raiders will relocate to Los Angeles.

However, the risk for Spanos is that the franchise would be on the hook for a $650 million relocation fee paid over 10 years, determined during the January owners meeting in Houston.

The Chargers also would have to purchase land and construct a practice facility, which would cost tens of millions of dollars.

NFL owners discussed the Raiders moving to Las Vegas during a committee meeting in New York in November. Raiders owner Mark Davis has told the league he plans on filing for relocation to move his franchise to Las Vegas in January.

The Raiders' and the Chargers' stadium situations will be up for discussion at a December NFL owners meeting in Dallas.
Related topics:
sportsespnlos angelesdean spanosrelocatelanflstories about the city of los angelessan diego chargers
Copyright © 2020 ESPN Internet Ventures. All rights reserved.
More Videos
From CNN Newsource affiliates
TOP STORIES