WLS
CHICAGO (WLS) -- Thousands of people cheered on U.S. Little League Champions Jackie Robinson West in a celebration that stretched from the city's South Side to Downtown Chicago.


The city dedicated it's usual Wednesday night fireworks show at Navy Pier to JRW as one more salute on this day of appreciation.

People from every corner of the city spent Wednesday applauding what these young men accomplished and finding deeper meaning in their success. 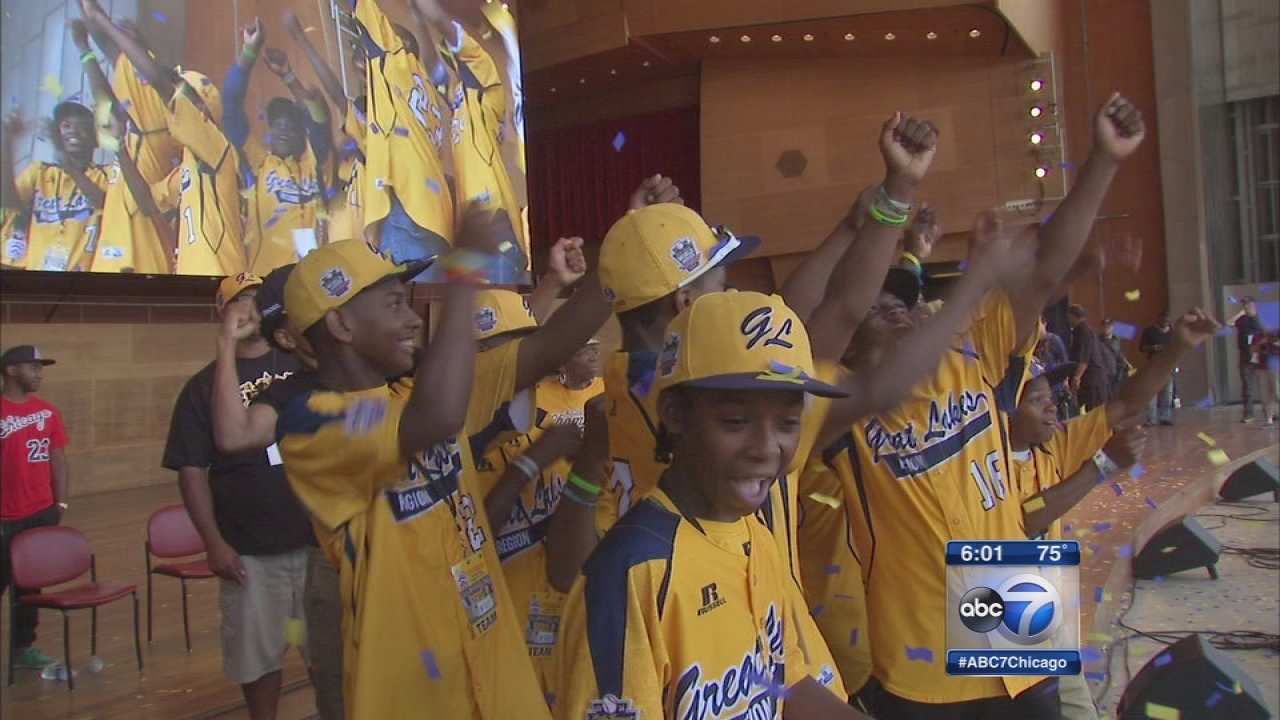 "Thank you, Chicago, for pulling together (for) 13 young boys who could let us know not what we have separate, or not what we have that divides us, thank you for embracing these boys who show us what we have in common," Jackie Robinson West Little League founder Bill Haley said.

Jackie Robinson West No. 23 Pierce Jones spoke for the team at Millennium Park. 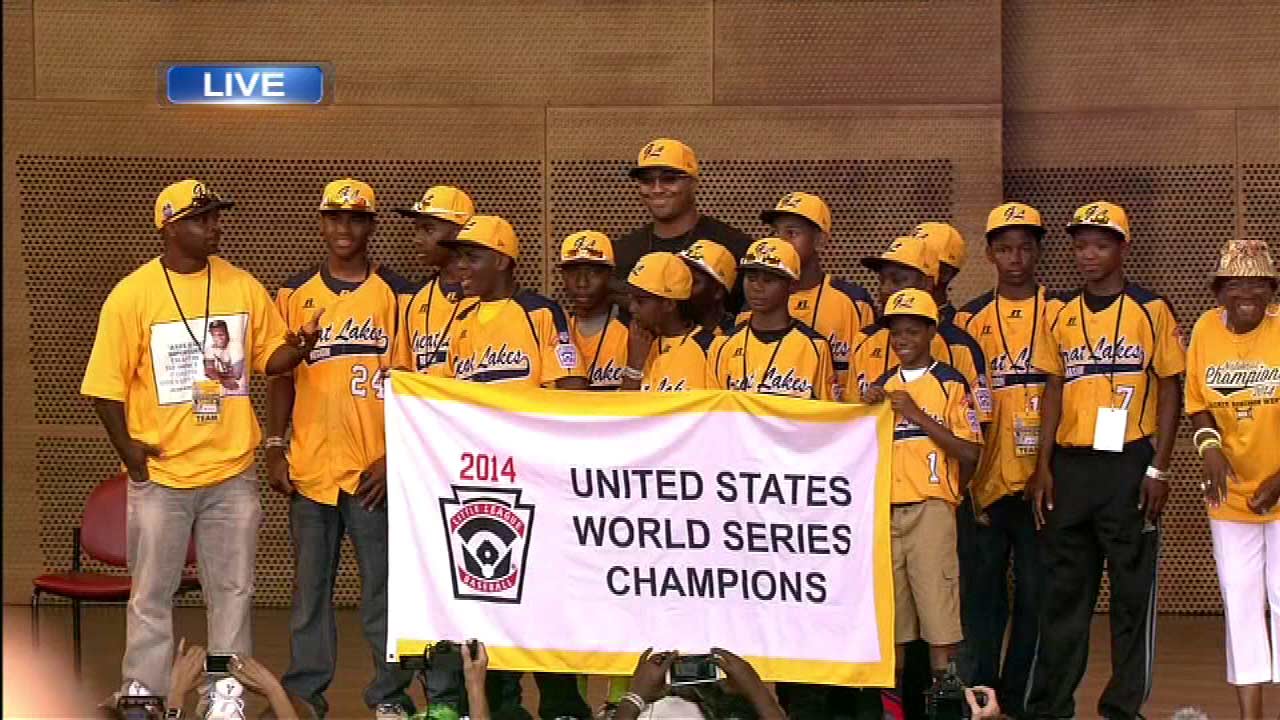 "We just want to say thank you. And we love you," Jones said. After the celebration, Jones said the team was "at awe" by the crowds.

"We did not think that many people were going to show up just to see us just to drive down the street, just to get a five second glimpse of us. We were overwhelmed at how many people showed up," he said.

"It was amazing, how all the people in Chicago supported us," Trey Hondras said. "So that's real big." 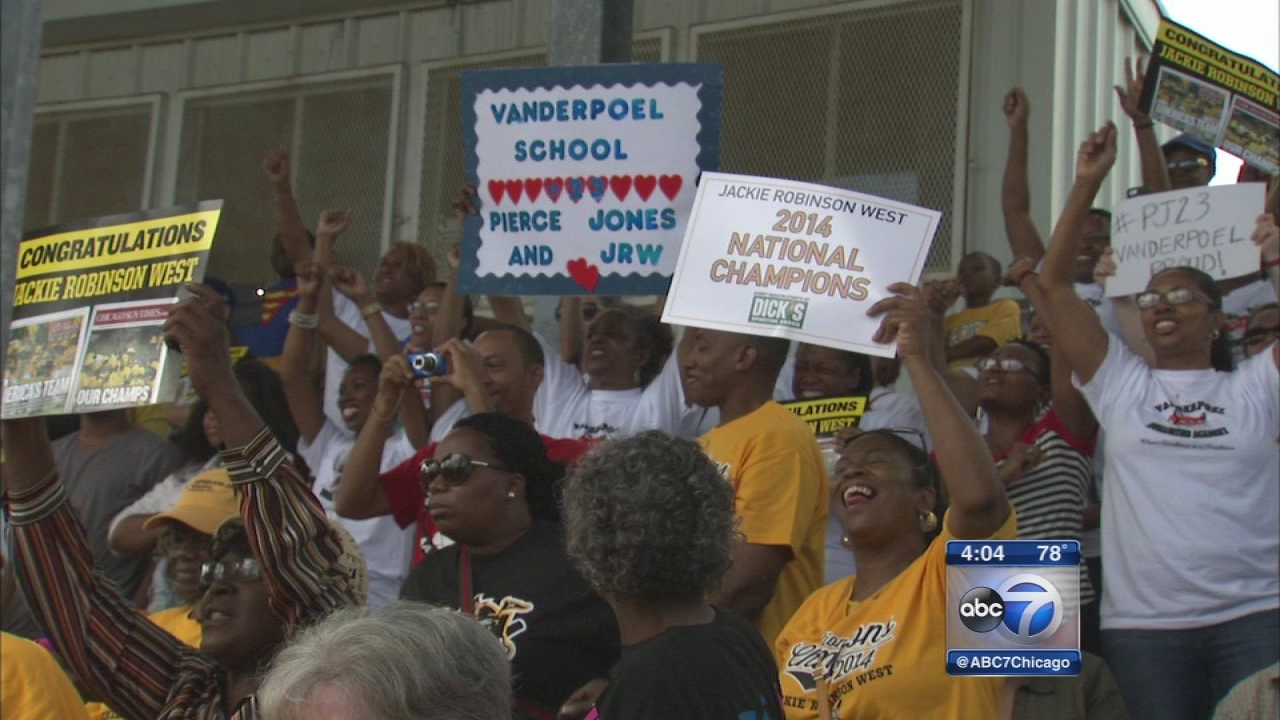 Wednesday's celebration began when U.S. champions Jackie Robinson West players took to the field at their home base, Jackie Robinson Park on the city's South Side, with large crowds cheering them on. Hundreds of people turned out for the rally in Washington Heights.

"Y'all not loud enough," JRW Coach Darold Butler joked with the crowd, which let loose with cheers. "I know you y'all personally. You all are not loud enough."

Butler became choked up introducing his team. At a time when Chicago receives national attention for violence, a group of 11- and 12-year-old athletes has captured the city's hearts and the spotlight.

"I just want to say, that I am so proud, that we have a group of young men in our community that we celebrate today that never even thought of picking a gun up in the first place. They decided to pick up a bat, a glove, and a ball. And with those three things, they not only captured the heart of Chicago, and the United States, but the entire world," WGCI's Tony Sculfield said. 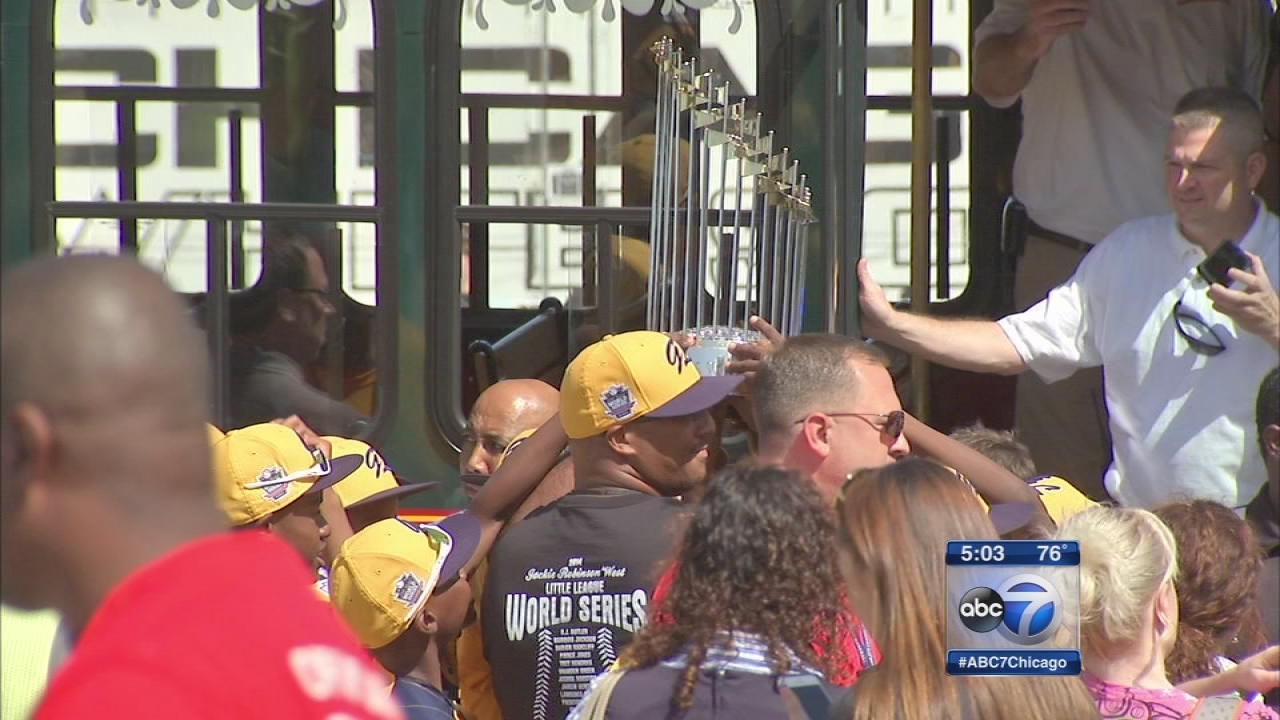 "We really need this, especially with all the violence that's been going on in Chicago. I think this is the most positive thing we have heard in Chicago in weeks. I'm so happy, I'm excited about it. This is awesome," Alicia O'Neal, who lined the parade route, said.

"I was just so proud I was tired of watching the news and crying. I said, 'I've got to get out here and support them.' I am very proud of the guys. I just hope that the rest of youth see it and know there is something positive out here to do," LaTonya Tyson, also on the parade route, said.

"I want to thank every coach they've ever played for from Tee Ball, Minor League, Little League. Coaches are just like teachers, you can soak up something from any coach you've played for," Haley said. "I want to thank our parents. A lot of the values that you guys saw our kids display were not from little league coaches. The values of dignity, winning with grace, losing with grace, those come from parents."

"I have been following your tremendous march to the Little League World Series and am so proud of you and the entire Jackie Robinson Team," she wrote. "Thank you for upholding my husband Jack's, your namesake's legacy, through your hard work, dedication and excellent teamwork."

After the Jackie Robinson Park rally, the team and their families boarded buses for a 13-mile parade to Millennium Park. Fans lined the route to wave as the team drove by. Fireworks erupted during a brief stop at U.S. Cellular Field, where the MLB team loaned the Little Leaguers, and Chicago's newest U.S. champs, their 2005 World Series trophy. After Sox Park, the team switched to double-decker buses to continue the parade.

They arrived to another huge crowd at Millennium Park, where Chicago Sox announcer Hawk Harrelson introduced the team.

Both the Chicago Cubs and White Sox were represented by Theo Epstein and Kenny Williams, respectively.

"Pick up a ball. A glove. A book. A paint stick. A science project. Something. Put down the guns," Williams said. 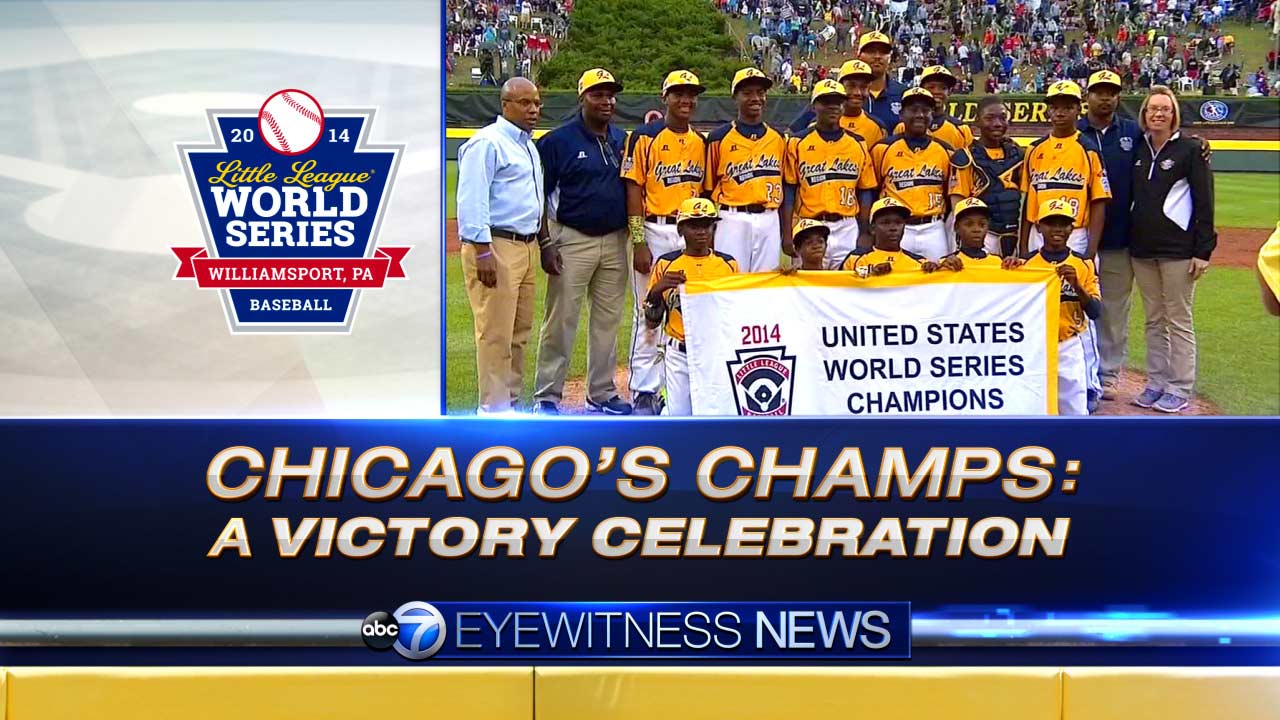 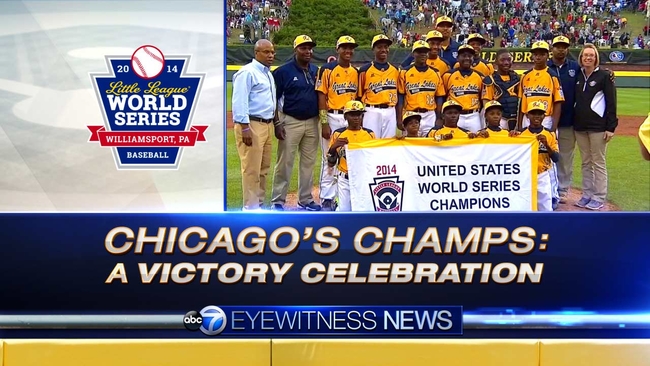 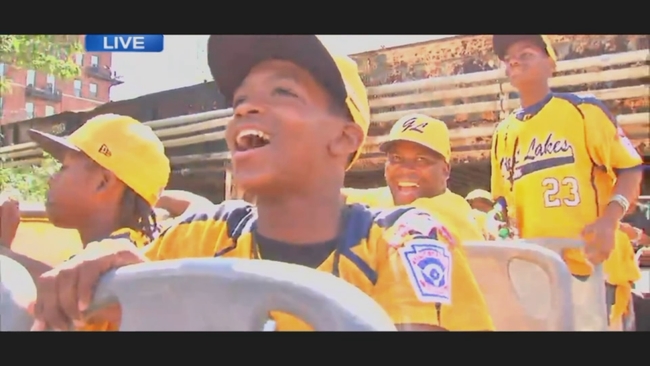 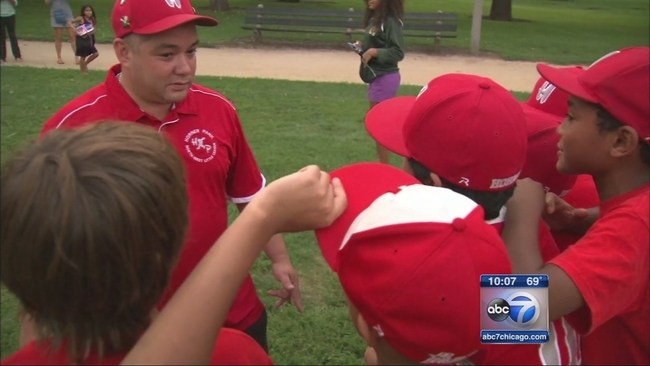 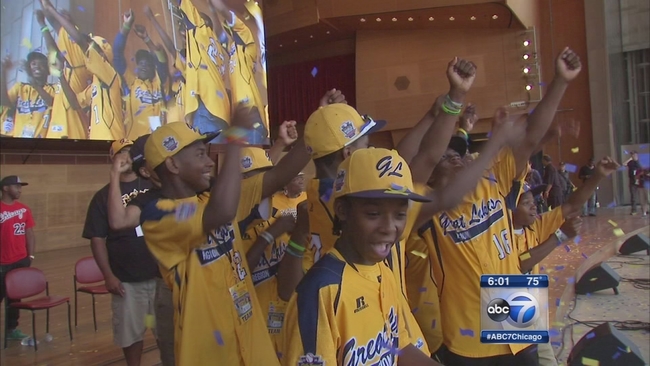