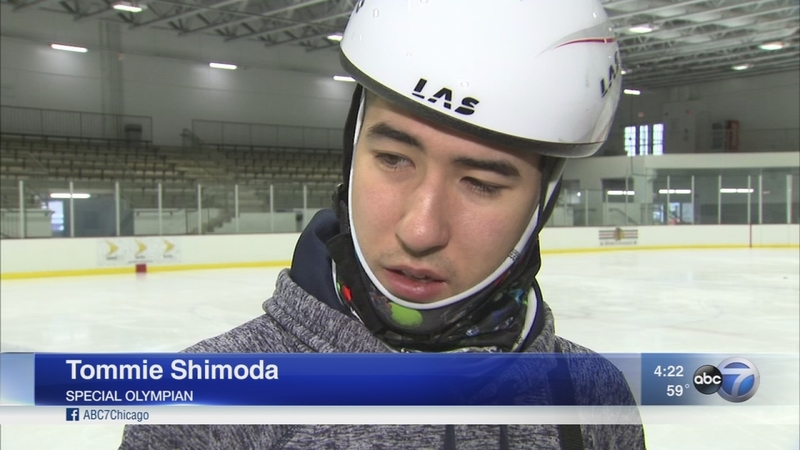 CHICAGO (WLS) -- The Special Olympics World Winter Games is in two weeks in Austria and will draw the best Special Olympians from around the world, including a Chicagoan who is considered one of the best speed skaters.

Tommie Shimoda, 24, who lives in the Mount Greenwood neighborhood on the Southwest Side, is one of just nine speed skaters from across the country to quality to go to the winter games, which will feature alpine skiing, snowshoeing as well as speed skating.

He can't speak, but that doesn't stop him from communicating.

"If I win the gold I'm going to skate around the rink with my American flag. I will be very proud," said Shimoda via a small computer that he programs to answers questions.

Shimoda just went to the state competition and did three events -- the 700, the 500 and the 300 and came home with two golds and a silver. And did it all in hockey skates.

Yes, hockey skates. He has never learned to skate in those long-bladed racers and seeing as he's doing so well that's the way it's going to be in Austria in two weeks. His biggest fan is his mother.

"Tommie has autism and he also cannot speak. He has a disability know as verbal dyspacsia," said his mother Babara Shimoda.

Tommie Shimoda has been a great athlete all of his life. He's been a great hockey player and that presents a problem. Hockey and speed skating are almost two different sports.

"It's amazing to see how he's able to pick up on small details and how his stride has improved from being a hockey player with nice quick strides, changing direction many times to lengthen his stride and really becoming a phenomenal, you know efficient skater," said his coach Kevin Coyne, of the Morgan Park Sports Center.