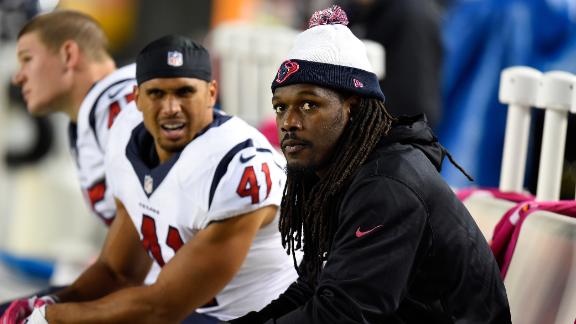 "I'm the best I'm going to be this season, I feel like," Clowney said. "Take it and go ahead and play football."

Clowney, the top overall draft pick this year, tore his meniscus during the first half of the Texans' season opener against Washington. He suffered the injury when he came down awkwardly after jumping to bat a pass. He had surgery Sept. 8 and returned to practice Oct. 17, the Friday before the Texans played the Pittsburgh Steelers on "Monday Night Football."

Clowney tested his knee on the field in Pittsburgh but did not play. He was OK running full speed ahead, but changing direction caused problems.

"It's coming along all right," Clowney said of cutting on his knee. "The knee's going to bother me a little bit, but there's some stuff you gotta push through and come out here and play."

In his first game back, Clowney won't take his full workload. Coach Bill O'Brien has said the Texans will ease him back into his usual playing time after missing six weeks.

"Just going to practice, working on my craft," Clowney said. "[I need to] get back in football shape. I've been running, but it's still not the same as running around on the football field."