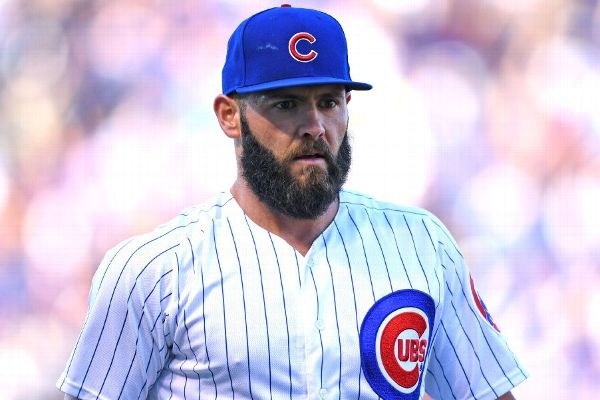 ST. PETERSBURG, Fla. -- Chicago Cubs righty Jake Arrieta is slated to start Thursday against the Milwaukee Brewers, barring a setback from a hamstring injury that has limited him to one start in September.

Arrieta, 31, threw 25 pitches in a light bullpen session Tuesday, under the guidance of the Cubs' training staff as well as team president Theo Epstein.

"He looked really good today," Epstein said afterward. "Mechanically sound. Executed his pitches and didn't feel anything. If it works out where he can pitch on Thursday, it would be good, so he can have three starts the rest of the year. Give him a chance to get stretched out and everything locked back in."

If Arrieta wakes up feeling OK Wednesday, he'll start Thursday's crucial opening game against the Brewers, though he'll be on a pitch count of 75-80 pitches.

Arrieta would then pitch again next Tuesday against the St. Louis Cardinals, leaving him one more start before the playoffs, in the season finale against the Cincinnati Reds.

"The good thing is the arm strength is there," Arrieta said. "It's remained there. I actually feel better from having a little bit of time off.

"I anticipate feeling really good. The plan is to be out there Thursday."

Arrieta left a game Sept. 4 after feeling a tug on his right hamstring. The injury was never considered serious, but the Cubs have been deliberate in his return in order to have him ready for the postseason.

The Cubs, who opened a two-game set against the Tampa Bay Rays with a 2-1 victory Tuesday at Tropicana Field, have a 3-game lead over second-place Milwaukee with 12 games remaining in the season.

Arrieta is 14-9 with a 3.48 ERA that includes a 1.98 mark in the second half.
Report a correction or typo
Related topics:
sportsespnmlbjake arrietastartinjuryreturnchicago cubs
Copyright © 2020 ESPN Internet Ventures. All rights reserved.
More Videos
From CNN Newsource affiliates
TOP STORIES