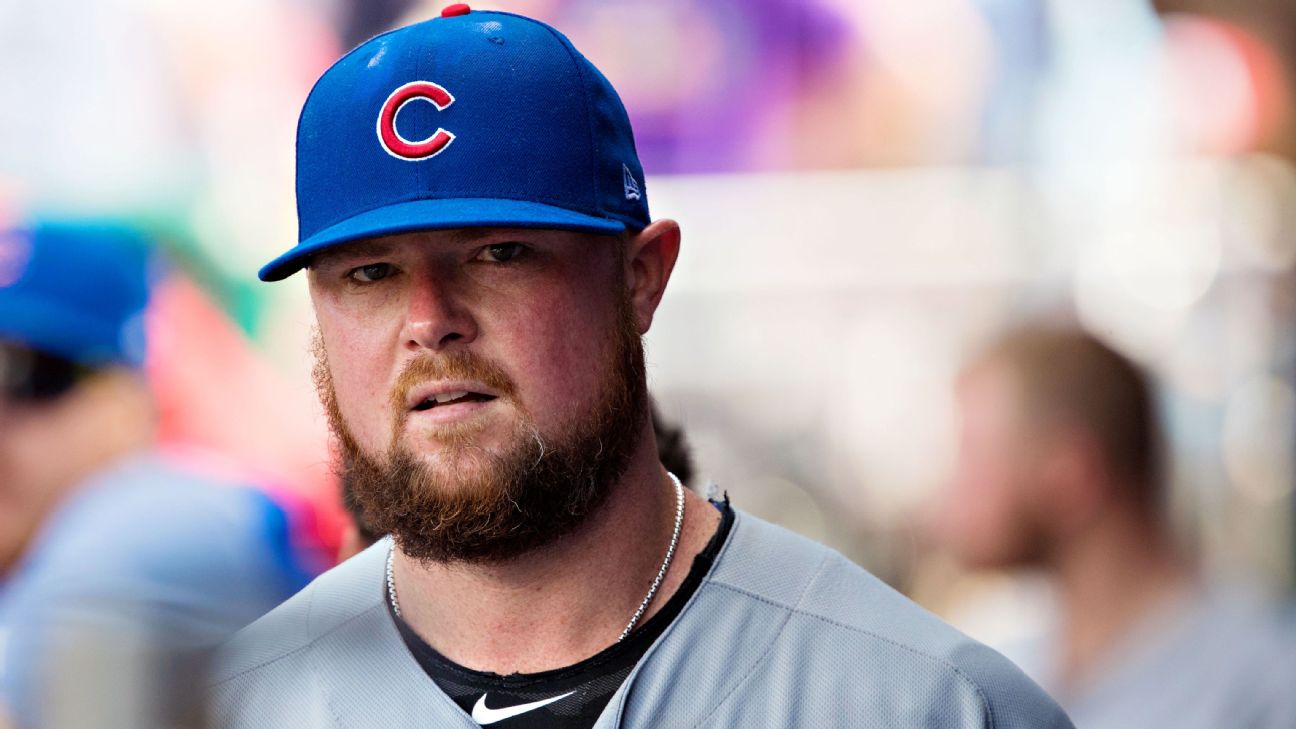 ESPN
By Jesse Rogers
MESA, Ariz. -- Chicago Cubs left-hander Jon Lester sounded off on Rob Manfred after the commissioner called the World Series trophy "a piece of metal" in an interview with ESPN that aired over the weekend.

"That's someone that has never played our game," Lester said Tuesday. "You play for a reason. You play for that piece of metal. I'm very proud of the three that I have. If that's the way he feels, then he needs to take his name off his trophy."

In the ESPN interview, Manfred spoke about potential punishment for the Houston Astros as the result of their sign stealing. MLB eventually settled on a season-long suspension for manager AJ Hinch and general manager Jeff Luhnow (both were fired by the team) and fined the Astros $5 million. No Houston player was punished.

"The idea of an asterisk or asking for a piece of metal back seems like a futile act," Manfred told ESPN of the idea of stripping Houston of the World Series title.

The commissioner apologized for those comments Tuesday.

Before that apology, Lester took umbrage with the commissioner's downplaying what winning the World Series means to players -- and, subsequently, what stripping the title would mean.

"That's the first thing when people walk into my house: I take them to where my trophies are," Lester said, referring to replicas. "I'm sure that hurt a lot of guys when they saw that, especially guys that haven't won it, that have been striving for years to try and get to it.

"I'm sure if Adam Dunn heard that -- he played one playoff game in his whole career -- he'd probably be pretty upset. It's a very, very special thing [Manfred] brought down significantly."

Lester, who has won two World Series titles with the Boston Red Sox(2007, '13) and one with the Cubs (2016), doesn't see the aftermath of the scandal going away any time soon.

"I don't think this is going to get brushed under the rug," Lester said. "Guys were disappointed that players didn't get punished.

"He's the boss, man. He makes those decisions."

Asked how he would handle any potential retaliation, Lester smiled.

"You're asking the impossible question," he said. "I think if I was a division team, I would handle it differently. ... It's going to be a little hairy the first couple times they play. I don't know how I would handle it. It's still a game, and you have to try and win."
Report a correction or typo
Related topics:
sportsespnnewsmlbjon lesterchicago cubs
Copyright © 2020 ESPN Internet Ventures. All rights reserved.
More Videos
From CNN Newsource affiliates
TOP STORIES

Not all mortgages eligible for coronavirus stimulus bill help; is yours?
Free educational resources for kids stuck at home
Man paid $5K to kill pregnant teen in Back of the Yards: prosecutors
COVID-19 stimulus Q&A: When will we be paid and how much?
Federal fix sought for 'Wild West' COVID-19 PPE competition
Show More
Lightfoot picks former Dallas chief for next CPD superintendent
How to make face masks from materials found at home
Chicago AccuWeather: Partly sunny, warm Friday
What to know about Illinois' 7,695 COVID-19 cases
Chicago police officer dies from COVID-19
More TOP STORIES News