Cubs may regret not adding lefty reliever before trade deadline 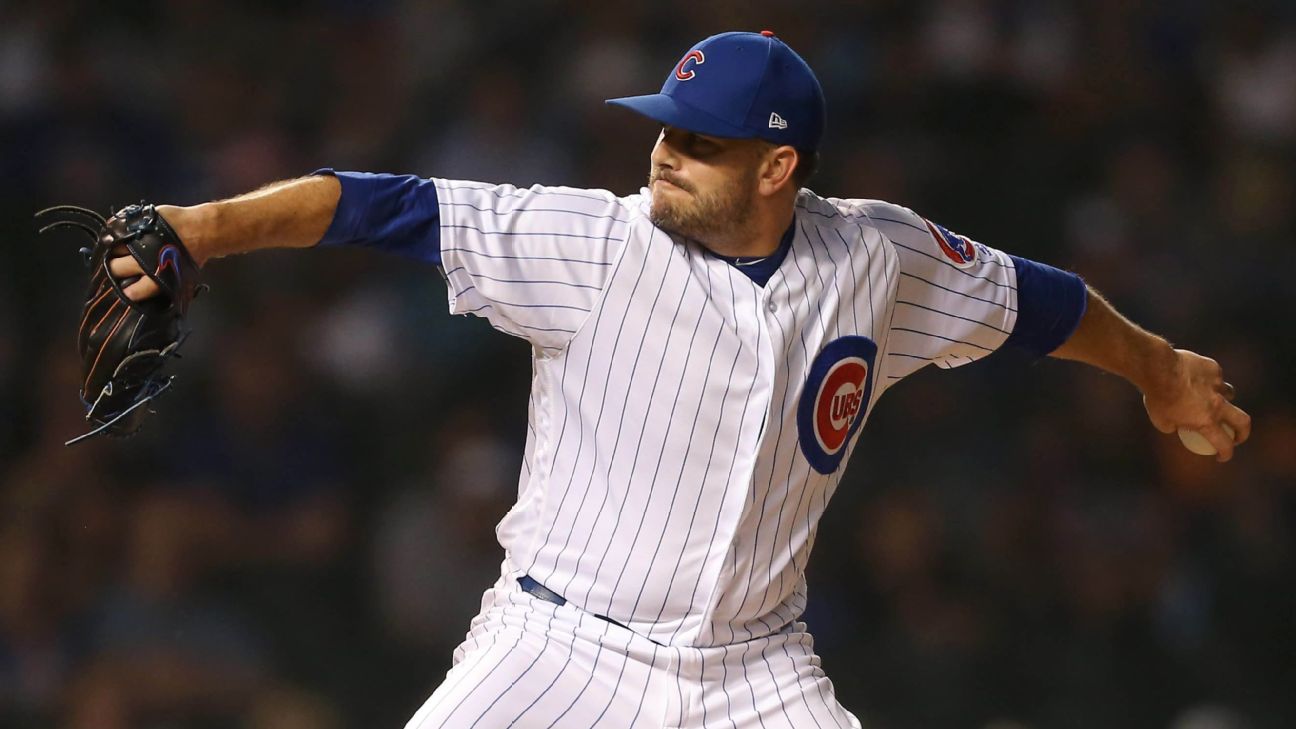 CHICAGO -- The Chicago Cubs have four lefty starters they like, but may not have even one in the bullpen they can count on. Did they miss the boat as the July 31 non-waiver trade deadline passed?

Thursday's 6-1 loss to the lowly San Diego Padres highlighted their need for a consistent left-hander. A tight, 3-1 deficit ballooned to 6-1 when lefties Justin Wilson and Brian Duensing gave up a combined three runs, a scene Cubs fans have witnessed far too often this year, especially from Duensing.

"Duensing has really been struggling," manager Joe Maddon said after the game. "Overall, Justin has been pitching pretty good."

Wilson's numbers are a bit deceiving. Entering the game, he had a respectable 3.24 ERA but that rises to 5.17 in games deemed as late and close. Even more confusing is his performance in high- and medium-leverage situations. In the former category, according to baseballreference.com, the opposition has just a .432 OPS against Wilson, but in medium situations it balloons to .803. Meanwhile, his WHIP is 1.43. There's no confusion there. That's not very good, but it's the best the Cubs have right now -- at least in the majors.

"Justin has been good," Maddon reiterated. "We've been having to get Duensing straightened out for a bit."

Duensing's case is far more cut and dry. His ERA is 7.34 after a 39-pitch outing on Thursday. He already has had one stint on the disabled list for a fatigued arm. Could another be in the future? Besides, how can a team interested in making the playoffs keep any pitcher with a 7.34 ERA on its staff?

To make matters worse, the Cubs just sent down a promising arm in Randy Rosario, who had a 1.97 ERA while allowing just three of 18 inherited runners to score. That's right, the Cubs sent to the minors a 1.97 ERA in favor of a 7.34 mark.

The reason is simple and happens on every team: Rosario was the only pitcher of the three with minor league options. The choice was to send Rosario down or cut either Duensing -- who has signed for one more year -- or Wilson. He'll be a free agent this November. The Cubs chose to keep the inventory.

In reality, Rosario was showing some regression as well, which brings us back to the trade deadline. At the 2016 deadline, the Cubs picked up lefty Aroldis Chapman, who helped them to a World Series win. Last year, they grabbed Wilson, who hasn't worked out quite as well.

The bottom line is, it's a position they've been trying to shore up over the course of several seasons with little sustained success. After this year's deadline passed, general manger Jed Hoyer was asked if the team had targeted a left-handed reliever.

"That was a big discussion that we had, talking about the make-up of our bullpen," Hoyer responded. "Left versus right. Ultimately, what we focused on was the ability to get out both sides. ... That was a big factor for us, the ability to get out both sides. We've used a lot of relievers and having guys that can only pitch to one or two hitters is difficult with that."

Hoyer didn't exactly address the question at hand. It's telling that when the Cubs got down in the game on Thursday -- just like a few nights ago in Pittsburgh -- Maddon summoned his lefties to pitch. In other words, he has deemed them his "minus" pitchers, those who, all things being equal, come into the game when the Cubs are trailing. In Pittsburgh, Wilson gave up a home run to Gregory Polanco in the eighth inning -- in a late, close situation -- that increased the Pirates' lead to 5-3. The Cubs scored one in the ninth, only to lose 5-4. The home run mattered.

And it could have mattered on Thursday when Wilson once again gave up a late run, then was followed by Duensing, who gave up two more. It's a tenuous situation that can seemingly be helped by the return of Rosario, but he doesn't have much big-game experience in the majors.