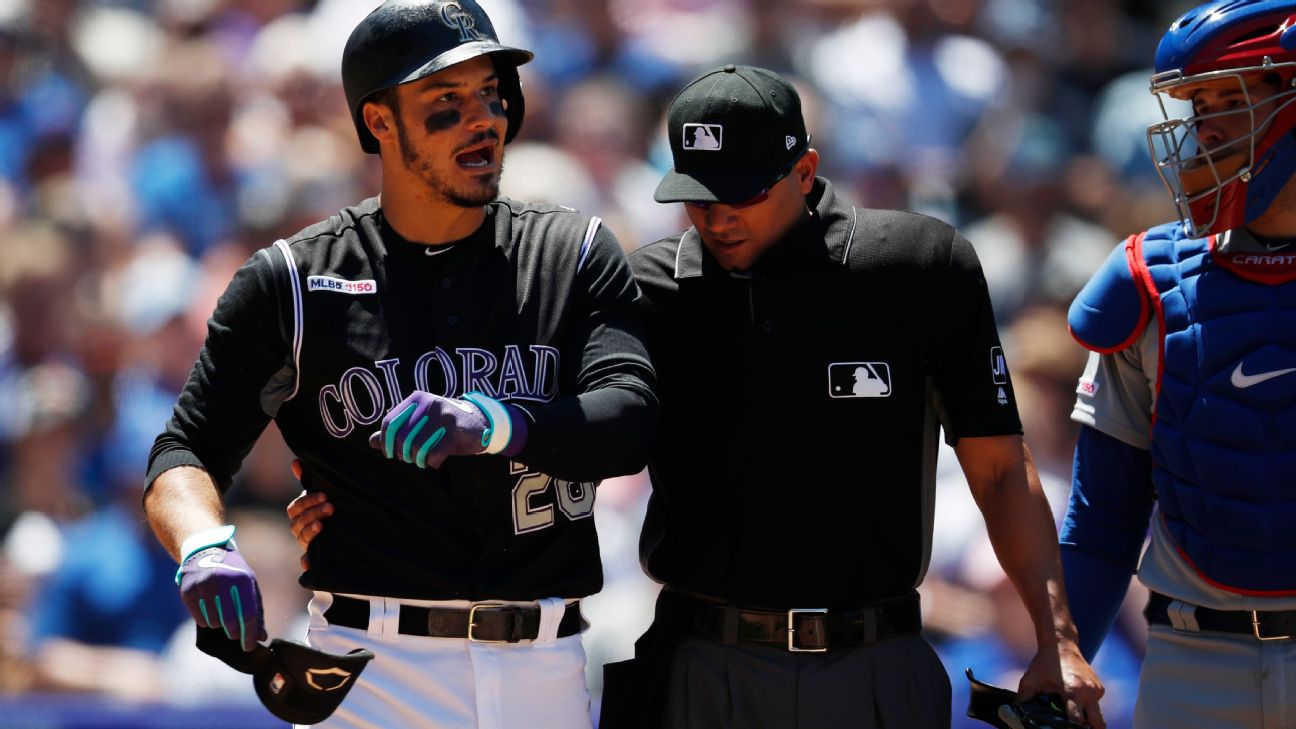 ESPN
By Jesse Rogers
DENVER -- Despite the bumps and bruises after four players -- two on each side -- got hit by pitches in the Chicago Cubs' 10-1 victory over the Colorado Rockies on Wednesday, both teams played it cool afterward.

Rockies star Nolan Arenado was the first to get nailed, as veteran Cubs starter Cole Hamels hit him in the left forearm in the bottom of the third inning.

"I kind of had a feeling it was going to happen," Arenado said after the game. "I don't have to explain what's going on. You saw the games in Chicago. You saw them here. It's baseball. I just thought it was a little high. If you were here for the series you saw what was going on."

Arenado is referring to several Cubs players being hit by pitches last week, most notably third baseman Kris Bryant. Bryant was hit by German Marquez in Chicago and was then plunked two more times Tuesday night by rookie Peter Lambert. Marquez also hit Bryant in the helmet last year at Coors Field. Hamels was asked if hitting Arenado was part of any retaliation.

"Not that I know of, no," Hamels said with a straight face. "I'm trying to get guys out. You don't want to see that and you don't want guys to get injured."

After getting hit, Arenado yelled over at the Cubs dugout about the high pitch and jawed with Hamels as well. He left in the fifth inning with a contusion.

"It's just baseball," Hamels said nonchalantly. "People yell at me all the time, good and bad."

X-rays on Arenado's forearm were negative and he's day-to-day. Hamels should also be fine after getting hit in the ankle by Bryan Shaw in the top of the seventh inning. He was walking gingerly in the Cubs clubhouse afterward.

"Those balls are hard," Hamels said. "They don't feel too good."

The back and forth wasn't over. In the eighth inning, Cubs first baseman Anthony Rizzo was hit by rookie Phillip Diehl, who was making his second career outing. That finally drew warnings from the umpires.

"I don't think that was on purpose," Arenado said. "We're not asking some second-appearance young kid to go throw at Rizzo."

Finally, Rockies catcher Tony Wolters was hit by struggling Cubs reliever Brad Brach in the bottom of the ninth with the game well in hand for the visitors. Colorado manager Bud Black argued that Brach should have been tossed since warnings had already been given. The umpires disagreed.

"I'm not trying to hit anyone, especially with the way I've been pitching," Brach said.

So as is the trend when these things occur, all the parties involved -- save perhaps Arenado -- denied there was anything nefarious going on. Cubs manager Joe Maddon also dismissed most of the extracurricular activity, urging those inflicted to simply make a quick decision.

"I've always had a rule among my guys," Maddon explained. "You have two options: Go to the mound or go to first base. But don't sit there and jabber. Make up your mind and do one or the other -- and either one is fine."

The two teams can only meet in the playoffs now as the season series is over after they played each other six times in eight days, with each team winning three games. Arenado was asked what he thought of more games against the Cubs.