MILWAUKEE -- It's the key unit of the Cubs' roster that is supposed to lead them to the postseason, but Chicago's high-priced starting rotation is as big a crapshoot as any part of its game right now. On Friday night, against the Brewers, left-handerCole Hamels continued a disturbing trend for this rotation when he took his team out of the game way too early for anyone's liking -- especially his.

"Sometimes, it's a battle and you'd rather it be a battle against the other team as opposed to internally, against yourself," Hamels said after a7-1 defeat.

In the first inning, Hamels walked the leadoff batter before getting in and out of a bases-loaded jam. He settled down but not for long. Things fell apart in the third, as he gave up nine hits overall in 3 innings, including a three-run home run to Christian Yelich. The Brewers never looked back, as the Cubs saw a short-lived 1-0 lead evaporate.

At his best, Hamels can place his fastball where he wants it and then put hitters away with his changeup. But he is far from that pitcher right now. The Brewers went 7-for-8 against his fastball and chased almost nothing out of the zone -- only 17% of his pitches to that area Friday, Hamels' lowest number of the season. Even at less than ideal, the veteran usually keeps his team in the game. That's not happening.

"Time is ticking and this is why I'm here," a frustrated Hamels said. "It's to get the job done and to continue to put good games out there for this team to give them an opportunity to win, and I'm not doing so."

Since a months-long stay on the injured list for an oblique injury, Hamels has been throwing batting practice. That was understandable for his first few starts back off the IL, but the time to shake off the rust should be well behind him. Over his past seven starts, he has given up a whopping 47 hits in 30 innings while compiling a 7.12 ERA. His manager says Hamels is healthy, so this is about execution.

Hamels hasn't had a good night in a long time, but the even bigger problem for the Cubs is that Hamels' rotation mates are seemingly just as inconsistent. Kyle Hendricks can't seem to pitch on the road. Jose Quintana has come back down to earth after a great stretch. Jon Lester is performing frequent escape-artist tricks; eventually, the traffic on the bases might catch up with him.

Which is why, on Saturday night, all eyes will be on Yu Darvish when he returns after skipping a start because of forearm stiffness. He has been excellent, but no one thought the Cubs would have to rely on him to lead the way at the most important time of the year. In March, a good season from Darvish was thought of as gravy. Now? He is as big a key as anyone on the team.

"We've always gathered our strength from our rotation," Maddon said. "That's been a bedrock for us."

In the past, Chicago could count on big-game pitchers such as Lester, Hamels and Hendricks -- and maybe the Cubs still can -- but time is running out and there's little margin for error. Clinching a wild-card spot is far from a done deal for them, and winning the National League Central is still an arm's length away, with September days disappearing from the calendar. Is it over? No. But it's getting late.

"I have four more starts to make a dent and help this team win," Hamels said.

Giving his team a better chance would be a start. It's not what the Cubs should be worrying about right now, not Hamels and Lester. Father Time catches up with everyone. The only question is, when is it their time? Maddon says it's not now.

"Moving forward, the starting rotation is going to be a big part of our success," he said.

Is that a prediction or hopeful thinking? The final weeks of the Cubs' season will tell us. 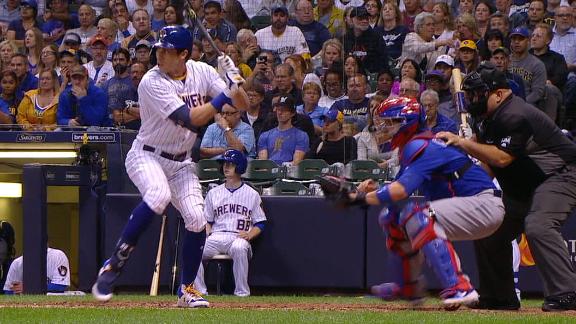