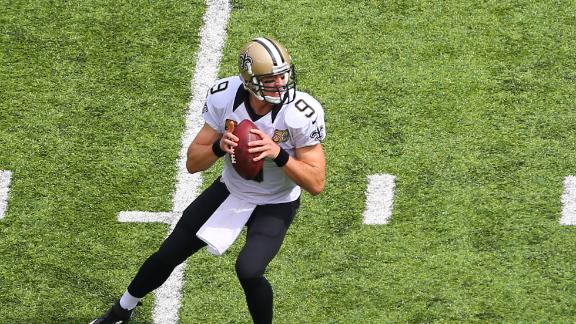 Brees' 8-yard pass to tight end Coby Fleener in the second quarter Sunday against the New York Giants lifted him above Marino's 61,361 yards, but a 1-yard loss to Tommylee Lewis on Brees' next completion dropped him into a tie with the Miami Dolphins great.

Brees had to wait until his next series to pass Marino for good, tossing a 5-yard completion to Brandin Cooks.

"Well, obviously under the circumstances ..." Brees said, without finishing the thought, when asked about passing Marino on such a disappointing day. "Listen, it's just a great honor to have played this long and to have played with the teams and the people that I've had a chance to play with. And I guess those numbers can stack up."

Brees had a decent performance against the Giants, but with only one offensive touchdown in a three-point loss, he was obviously dwelling on the missed opportunities after the game. In particular: missing Fleener on a potential touchdown pass and not handling New York's third-down pressure well enough.

"If you told me prior to the game that we would get three takeaways defensively and not allow an offensive touchdown, I'd say your chances of winning are pretty good," said Brees, who credited New Orleans' defense for an "outstanding" performance in the loss.

If the 37-year-old Brees stays healthy and maintains his level of play, he could break Manning's record early in the 2018 season, when Brees will be 39 years old.

It might take him until 2019 to move past Manning's record 530 touchdown passes -- Brees entered Sunday with 432 -- but both records are within reach for Brees, who has vowed to keep playing well into his 40s.