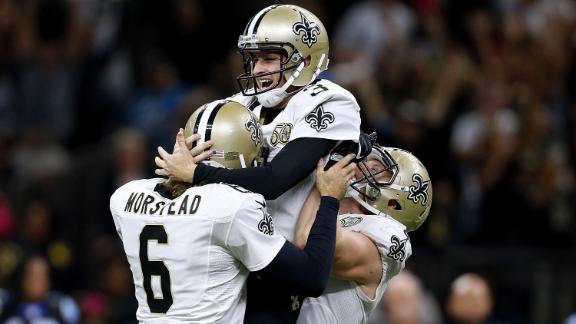 He and retired quarterback Peyton Manning had been tied with 14 400-yard passing games entering Week 6.

"I don't know what to make of that [record]," Brees said. "I mean, I guess it's a record for you guys to talk about. But it's more so stats like you score 41 points, and you're really good on third down, and you made some big plays in the passing game, and you had 10 different receivers catch the ball. ... I'd say probably most of those games were that way. So it's just good execution for us offensively and guys making plays."

He also threw four touchdown passes as the Saints dropped the defending NFC champion Panthers to 1-5 this season.

"Listen, if you can hit Cooks in stride, then I don't think there's anybody that's gonna catch him, except Usain Bolt," said Brees, who also credited fullbackJohn Kuhnfor a block that allowed him time to make the deep throw.

The Saints needed every bit of Brees' 465 yards for their second straight win. He completed 8 of 9 passes for 46 yards to set up the game-winning 52-yard field goal with 11 seconds left.

"These are defining wins," Brees said. "These are ones you can draw from as the season goes along and really get a lot of strength from. Also, it gives you great confidence and poise, I think, when those situations arise in the future. Honestly, we've played five games, and we've had five games just like that."

Brees went home with a fat lip to go along with the thrilling victory -- thanks to what he described as a punch to the mouth from Panthers defensive tackle Kawann Short.

Short was penalized for roughing the passer on the third-down play late in the fourth quarter, which would have been severely costly for the Panthers if it had counted.

But things were going so well for Brees and the Saints' passing offense that they declined the penalty, since Brees wound up throwing an 8-yard touchdown pass to tight end Josh Hill anyway.

"Well, I don't know if it was [a hard hit]. It looked like he just straight punched me in the mouth," Brees said when asked about the play. "That's what it felt like; that's what it looked like on the JumboTron. But listen, I'll take the 15 yards every time. But we got the touchdown anyway, so we're good."

Short shoved Brees hard in the face, knocking him to the ground, a moment after Brees released the ball.

But Short insisted afterward that it was not an act of frustration.

"Not at all. Not at all," Short insisted. "I was getting outside to contain and I just threw my hands up. He's a shorter quarterback. I just happened to hit him in the face. It wasn't on purpose. It wasn't out of frustration or nothing. I was just doing my job.''

Saints drop Panthers to 1-5 on late FG
Drew Brees and Cam Newton combine for 787 passing yards and six touchdowns, but it is Will Lutz's field goal with 11 seconds left that gives the Saints a 41-38 victory over the Panthers.