Duncan Keith suspension will include one Blackhawks playoff game 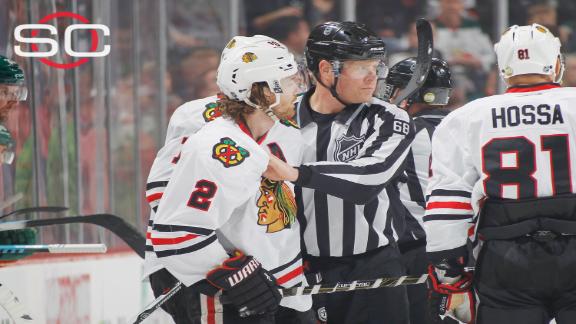 The suspension, announced Friday by the NHL, includes the final five games of the regular season and the first game of the playoffs.Keith will forfeit $148,883.35 under the terms of the collective bargaining agreement, based on his average annual salary.

"We're respectful for their decision there," Blackhawks coach Joel Quenneville said after Chicago beat Winnipeg 5-4 in overtime Friday night. "We'll take it and move on and learn from it as well."

Keith, the reigning Conn Smythe Trophy winner, received a match penalty for intent to injure and was ejected for swinging his stick and catching Coyle in the face Tuesday night in the Wild's 4-1 win over the Blackhawks. Keith was knocked to the ice by Coyle and retaliated by swinging his stick while on his back.Coyle was left with blood dripping down the bridge of his nose and required medical attention, but he returned to the game.

In a video announcing the suspension, the NHL department of player safety called Keith's action "an intentional and retaliatory act of violence by a player with a history of using his stick as a weapon."

"It's important to note that Keith is in perfect control of his stick at all times," the league said in the video. "This motion is made intentionally -- not recklessly. This is not a case where two players are battling for position or puck control and a stick rides up suddenly. This is not a defensive high stick."

Keith was suspended in the 2013 playoffs for swinging his stick and hitting Los Angeles Kings forward Jeff Carter in the face.

"One playoff game is very big when you know his importance to our team and the minutes that he absorbs," Quenneville said.

Keith could appeal the suspension to commissioner Gary Bettman, but it's not clear how long that process would take.Calgary Flames defensemanDennis Widemanrecently appealed a 20-game suspension to Bettman and a neutral arbitrator, and while it wasreduced to 10, Wideman had already served 19.

The Blackhawks, the defending Stanley Cup champions, have clinched a playoff berth and are third in the Central Division, at 45-26-7 with four games to play.