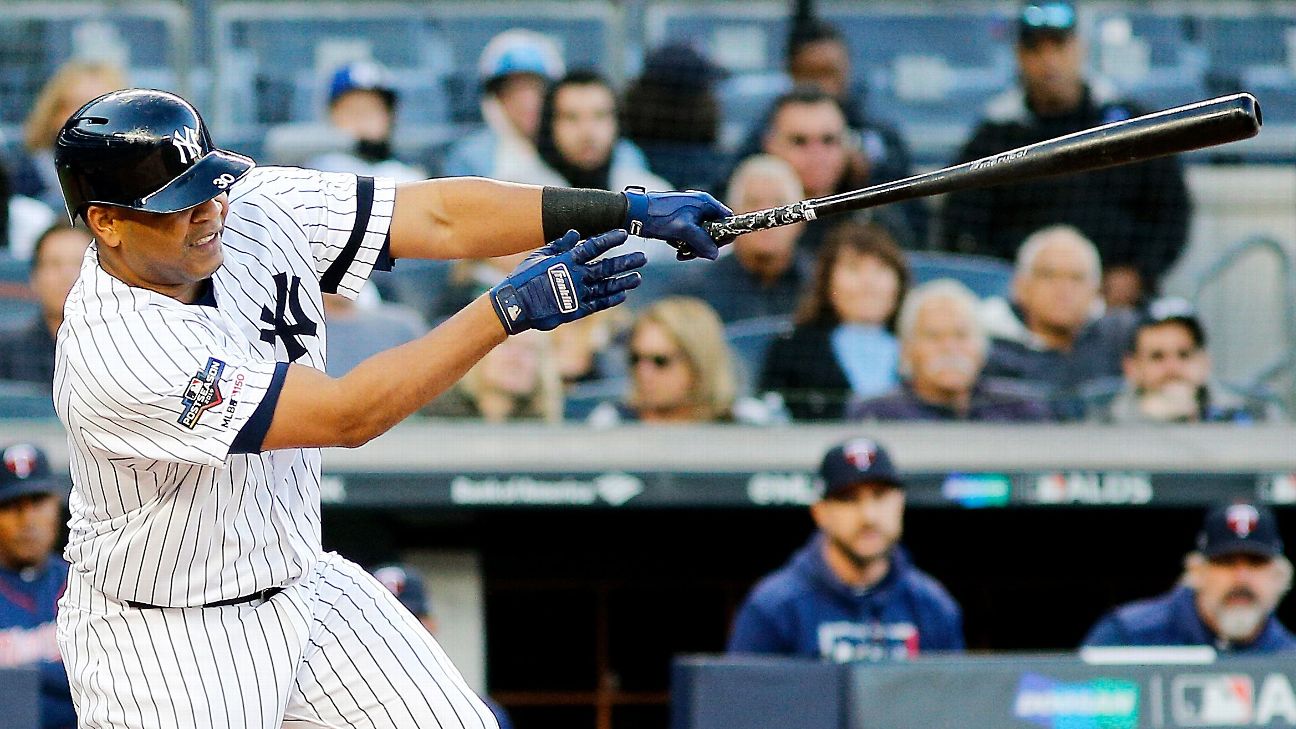 ESPN
CHICAGO -- Edwin Encarnaciónsaw the young players the Chicago White Sox have and a bright future for a team eyeing a run at the AL Central championship after seven straight losing seasons. That's why he chose to be a part of it.

Encarnación and the White Sox finalized a $12 million, one-year contract on Thursday, putting him in position to become Chicago's designated hitter and a part-time first baseman along with José Abreu.

Encarnación gets a $1 million signing bonus payable by Nov. 15, and an $11 million salary this season. The White Sox hold a $12 million option for 2021 under the deal, which was agreed to Dec. 25 subject to a successful physical.

"I'm very excited to be part of this team, I think this team has a great future," he said. "To be here and try to help this team to go where we want to go and make the playoffs."

Encarnación hit 34 home runs in 109 games for Seattle and the Yankees last year. The three-time All-Star led the American League with 21 homers when the Mariners dealt him to New York in June. The Yankees declined a $25 million option for next season, opting to pay a $5 million buyout.

He hit .249 with 13 homers and 37 RBI in 44 regular-season games with the Yankees, limited by oblique problems. He batted .308 while New York beat Minnesota in the AL Division Series, but was 1 for 18 with 11 strikeouts in the AL Championship Series against Houston.

Encarnación, who turned 37 on Tuesday, has eight straight seasons with more than 30 homers. He has 414 homers in 15 years with Cincinnati, Toronto, Cleveland, Seattle and New York. Last year he became the first major leaguer to play on three continents in one season, opening the season in Tokyo with the Mariners and going to London in June with the Yankees.

"Edwin is a professional hitter, someone who makes each and every at-bat count," general Rick Hahn said in a statement. "His long track record of power is impressive and as a veteran run producer, Edwin adds another threatening bat to our lineup, lengthening our batting order and increasing (manager) Rick Renteria's offensive options on any given night."

The White Sox have been one of baseball's busiest teams, adding to a promising young core. Chicago also added catcher Yasmani Grandal and pitchers Dallas Keuchel, Gio González and Steve Cishek in free-agent deals. Outfielder Nomar Mazara was acquired in a trade with the Texas Rangers.

Abreu, who led the AL with 123 RBI last season, was re-signed to a $50 million, three-year deal, and top prospect Luis Robert agreed to a $50 million, six-year contract last week, clearing the way for the outfielder to begin the season in the majors.

The White Sox were 72-89 last season, well behind the 101-win Minnesota Twins and 93-win Cleveland Indians. But with experienced veterans added to a promising young core, they believe they are in position to make a big jump after missing the playoffs for the 13th time in 14 years since their 2005 World Series championship.

Encarnación and Grandal have five straight trips to the postseason. Keuchel, the 2015 AL Cy Young Award winner with Houston, made the playoffs four times in the past five years and won a World Series championship with the Astros in 2017.

"That's obviously a tremendous track record for each of them, but also speaks in part to what we're trying to accomplish not just on the field but in terms of taking that next step in our clubhouse, and this young core not only growing together but learning how to win and learning what it takes to be successful not only over the course of the summer but well into October as well," general manager Rick Hahn said. "Edwin's another piece in trying to accomplish that."

The veterans the White Sox added are joining a team that has reigning batting champion Tim Anderson, who led the majors with a .335 average. Yoán Moncada had a breakthrough season, hitting .315 with 25 homers and 79 RBI. Eloy Jiménez showed pop as a rookie, with a .267 average, 31 homers and 79 RBI. Prized outfielder Luis Robert figures to debut next spring, and top prospect Nick Madrigal might also be ready to get significant time at second base.

Encarnación said he is "very close" with Jiménez and has been following him since Jiménez was 14. He called Jiménez "a great hitter" and praised the other big, young bats in the White Sox's lineup.

"They're very smart hitters," Encarnación said. "They have a great idea (of) what they are doing at the plate."