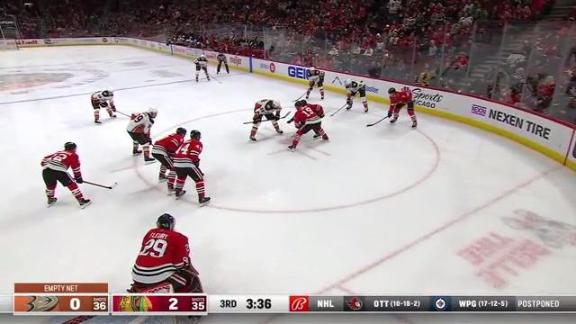 CHICAGO -- - Marc-André Fleury stopped 37 shots for his third shutout of the season and the Chicago Blackhawks beat the Anaheim Ducks 3-0 on Saturday night for their fourth straight win.


The 37-year-old Fleury recorded his 70th career shutout. The Blackhawks played an up-tempo game - and one of their most complete efforts this season - but still needed the veteran to come through with timely stops after occasional breakdowns.

"It was scrambly at times, but I thought we showed a lot of composure," King said. "We controlled it quite a bit. He made the saves when we needed him to."

Defenseman Riley Stillman said the Blackhawks felt good, coming into this one on a roll, but were buoyed by Fleury.

"Flower is just unbelievable," Stillman said. "He unbelievable every night. The saves he makes. The athleticism he has. He's a fighter and he never stops. ... We know he's going to stop the door for us every night and that gives us confidence."

Lukas Dostal made 33 saves as the depleted Ducks lost their third straight and fell to 2-6-2 in their last eight.

Dostal, a 21-year Czech, was sharp in his second NHL start and third game with John Gibson and backup Anthony Stolarz both in COVID-19 protocols.

Anaheim leading scorer Troy Terry also was in the protocol and forward Sonny Milano sat out with upper-body injury suffered in a 7-3 loss at Minnesota on Friday night.

"The chances, they were there," Anaheim coach Dallas Eakins said. "They were in there behind the goalie. There's not much more we can do to score other than finish it in the net. ... (Fleury) is excellent. He's been that for a very long time. He still plays at a very high level and was excellent tonight when he needed to be."

Chicago was short-handed, too. Seth Jones sat out his third game in COVID-19 protocols. Fellow defenseman Jake McCabe and forwards Kirby Dach and Dylan Strome also were in the protocol.


Dostal was flawless in the scoreless first period as Chicago outshot Anaheim 15-11. He made several tough saves, including two close-in on Jonathan Toews with just under 5 minutes left.

Hagel opened the scoring at 5:33 the second period, capping a wild end-to-end sequence.

Defenseman Jakub Galvas swept a loose puck off the Blackhawks goal line as Anaheim pressured on a power play after Chicago's Erik Gustafsson went off for roughing at 3:23. Fleury made two more saves before Riley Stillman cleared a loose puck from midair in the crease out to center ice. Gustafsson jumped out of the penalty box and carried the puck to the left corner of the Anaheim zone. He passed to Hagel, who trailed on the play and beat Dostal high on the stick side from the slot for his ninth goal.

Kane added a power-play goal at 4:22 of the third to make it 2-0. He connected for his ninth goal using a one-timer to complete a 2-on-1 break with DeBrincat.

Chicago's star forward has goals in back-to-back games after not scoring in 13 straight.

"That's vintage Patrick Kane," King said. "He hangs around and he hang around, and when he strikes, he strikes.

"We had contributions from everybody," King added. "The guys that are supposed to have good games for you, they had good games."

Eakins pulled Dostal for an extra attacker with 4:14 left in the third. Kubalik skated in after taking DeBrincat's feed and slid in his eighth goal 53 seconds later.


Eakins and King have known each other for about 35 years, but faced each as NHL coaches for the first time on Saturday.

The two first met in a fight as opposing junior players in the Ontario Hockey League the late 1980s, but became close friends when they skated for the Maple Leafs and were roommates in 1998-99. When Eakins was head coach of the AHL Toronto Marlies in 2009, he hired King as an assistant.

Dostal won his first start in his NHL debut on Jan. 9, making 33 saves through overtime and two more in the shootout in a 4-3 win over Detroit at Anaheim.

He entered in relief of Stolarz on Friday in Minnesota.

Blackhawks: At Seattle on Tuesday night.